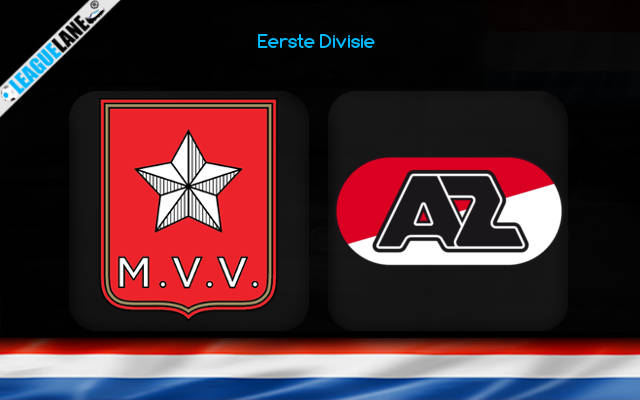 MVV Maastricht is on a 3-game losing streak and they are second from the bottom in the league.

They have the second worst conceding figures in the league and has lost 11 out of the last 12 games played across all venues with securing a win only once.

Jong AZ are unbeaten since the last 2 games after their prior 5 successive league defeats.

With only 3 points and 4 places apart, MVV will host the AZ Reserves at De Geusselt this Monday for the 27th Round of Eerste Divisie.

The home team is at the 19th spot on the standing with only 26 points from 29 games. They won only 8 times in the league while drawing on twice and losing on 19 other occasions. They scored 29 in total while conceding a sum of 60 which shows that they highly lack in quality at both ends.

MVV Maastricht lost their third game in a row against den Bosch by 1-3. Over their past 6 clashes alone, a total of 22 goals have gone in for both teams combined at an average of 3.67 goals per game with 6 of those belonging to MVV.

On the other hand, the Jong AZ resides at the 14th position on the table with 29 points. Of the 29 matches played, they won on 8 games while drawing on 5 and losing on 16 other occasions.

Jong AZ go into this game following on from a 3-2 Eerste Divisie win over Telstar in their most recent outing. They have been scored against on 5 of their last 6 matches, letting opponents get 11 goals in all.

Ahead of this clash, Jong AZ are without a win away from home in their last 12 league matches meanwhile the hosts lost the last 4 games on at home. We therefore, feel that a draw is likely to occur as both sides are equally weak as of recent.