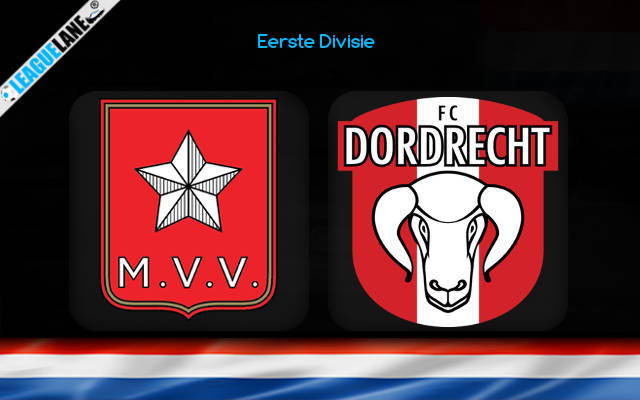 In the last 10 encounters between both these sides in all competitions:

The hosts currently sit in 14th position in the league table with 12 points on board after 10 league games as they have won just once and lost 4 times in their last 5 league games.

MVV Maastricht come into this fixture on the back of a 2-0 loss away from home to VVV in a game which saw them have 45% of ball possession as they had 16 attempts on goal with just 5 on target.

On the other side of the field, the visitors, Dordrecht currently sit rock bottom of the league table with just 6 points on the board after 10 league games as they have lost 4 game and drawn once in their last 5 league games.

Dordrecht come into this fixture on the back of a 1-0 loss at home to Helmond Sport in a game which saw Dordrecht’s Liam Bossin score an own goal. In that game, Dordrecht had 55% of ball possession with 15 shots on goal with 8 of them of target.

Taking the above into consideration, we back the odds at 1.85 for the visitors, MVV to win this fixture. The recent form of MVV has not been convincing, but they have enough quality in their side to edge out a victory in this game against an opponent who have struggled a lot in the recent past.

Tips for MVV Maastricht vs Dordrecht