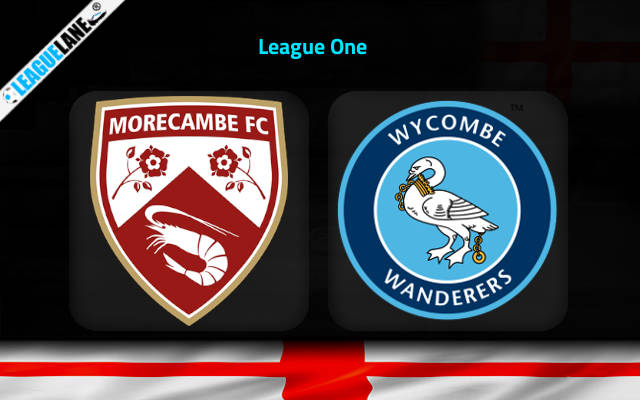 In game week 29 of League One, Morecambe faces Wycombe for their next match on Saturday at Morecambe.

Morecambe sits in the 21st position on the league table with 24 points from 26 matches. The last match against Wigan Athletic ended at a loss for the team. The match ended with 1-2 FT score.

Morecambe has exhibited a poor performance throughout the season. With yet another loss in the last match, their loss tally has moved up again. Occasional wins in the matches help the team from further moving down the table. Their win against Doncaster Rovers helped the team to stop a 6-game cold streak. However, the team couldn’t win again in the next two consecutive matches. Their performance in home matches has given mixed results for the team.

Wycombe Wanderers sits on the top of the table with 56 points from 27 matches. They played their last match against Oxford United, in which Wycombe was the sole goal scorers. The match ended with 2-0 FT score.

Wycombe has played well throughout the season. They have won in most of their matches and are at the moment keeping an unbeaten streak of four games. Wycombe has played 14 away matches so far in the league and has only lost in three of the matches. The team has won in the last two matches as well.

Morecambe stays in the relegation zone. They need more wins in the upcoming matches if they wish to avoid relegation. However, Wycombe has played well in the season and is on the top of the league. Wycombe is the better team of the two and has more chance in winning the match even if they are playing in an away ground.

We believe Wycombe is most likely to win the match. In most of their recent matches, Wycombe has scored two or more goals. So, the match is likely to end with under 2.5 goals and Wycombe may keep the clean sheet in the match as well.