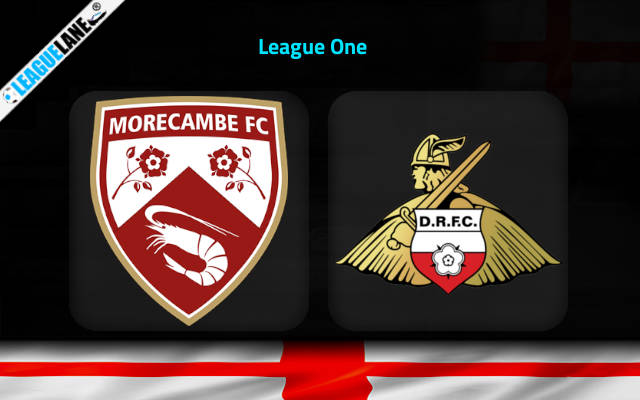 Morecambe managed to keep themselves out of the relegation zone for most parts of their first ever campaign in League One. Having never been relegated in their history, a horrific month of December has dropped the club into the relegation zone.

Disregarding their crucial win against Shrewsbury, Doncaster Rovers have been a shambles ever since the international break in November.

Separated by four points in the table, these two teams are set to compete in a relegation scrap of huge implications this Sunday at Mazuma Stadium.

The Shrimps in their previous match were not able to get the better of Crewe, another team fighting against relegation away from home, as the match ended with a score line of 1-2.

This was the club’s 4th loss in five league fixtures from which they were able to manage just one point. As a result, the club is now 21st in the league, two points behind the 20th place team.

Rovers meanwhile were last seen in a 0-3 loss at home against 2nd place Sunderland. This was the club’s 6th loss in seven fixtures.

With just the win against Shrewsbury to show for in the last seven fixtures, the club is bottom of the league table, six points away from safety.

Clearly, both teams have been abysmal in recent fixtures. However, the hosts have managed to rescue two points in their last four home fixtures.

Additionally, the Reds have managed to pick up just a point on the road this season. The club has lost an eye-watering 12 away fixture already this season.

Since the hosts have had a less disastrous season I have backed them to win this fixture.

While there is nothing much impressive about Morecambe’s defense they have managed a couple of clean sheets in their last five fixtures. Furthermore, the visitors have scored just once in their last six away fixtures. Therefore I have backed the hosts not to concede in the game.