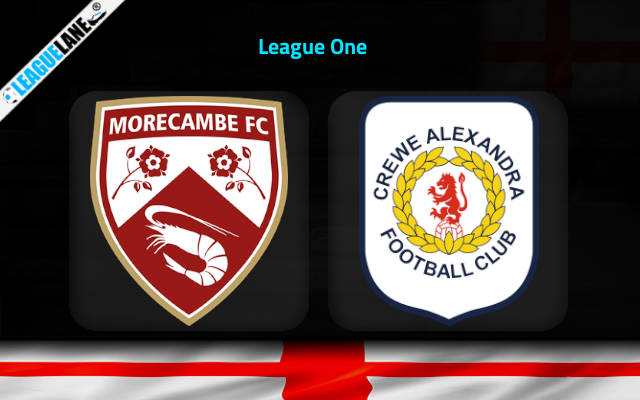 Morecambe have never really found their foot in the 3rd division of English football, following their promotion this season.

They are one of the two teams in the top four tiers of English football to have never faced relegation. However, they may no longer hold the reputation at the end of the season if they are to continue with their current form.

Despite losing three of their previous four fixtures Crewe will head into the fixture with the better run of games.

Desperate to get out of the relegation zone and with half of the season remaining following the fixture, these teams will clash at Mazuma Stadium this Wednesday.

The Shrimps avoided their 4th consecutive loss in league fixtures on the previous matchday through a goalless draw at home against Fleetwood Town.

The club has failed to deliver all across the park, struggling both defensively and while going forward. Consequently, the club is 21st in the league, two points behind safety.

The Railwaymen having gained six points through two wins in the preceding five fixtures are rock bottom of League One, 5 points behind their opponents for this midweek.

Sheffield United defeated this side with ease in their most recent game at Gresty Road by a score line of 0-2.

Both teams involved have had a significant shortage of goals in recent weeks. The hosts have failed to score in four consecutive fixtures while the visitors have scored less than a goal on average this season.

Considering the above, witnessing more than two goals in the fixture would be a surprise.

Clearly, neither team has had convincing results in recent times to suggest they might come away with the win. With that being said, the hosts in addition to the home advantage have avoided defeats in four of their last six home fixtures.

To further add to that they will take on a side that is on a five match losing streak in away games and is winless on the road this season. Consequently, I do not see them losing all three points this Wednesday.