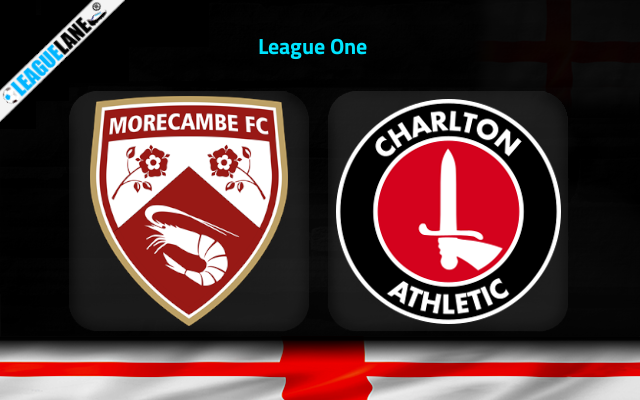 Morecambe vs Charlton Predictions and Free Tips from our expert tipsters when the teams go head-to-head in the England League One on Saturday, 10 December 2022.

Morecambe are currently the worst team in the league. They have won just four of the 20 games they played so far in this season. As a result, they are positioned at the bottom of the table.

Meanwhile, Charlton will head into this game with some spirits despite of their current inconsistent form. Saturday’s League One fixture is a perfect chance for them to make up for the disappointment of not being able to win in the last five games.

The two met for the first time in the last League One season. Morecambe were unbeaten in both the games played against Charlton last season.

Both the teams failed to win the encounter held at this stadium. However, the goals were over 2.5 in both the matches they clashed.

Who will win the match between Morecambe vs Charlton?

Charlton are unbeaten in three of their last four away matches. Meanwhile, Morecambe will come into this match without winning four of their last five home matches.

Based on the current form, winning chances are more for the away side Charlton. By the looks of things, traveling supporters will have a pleasant day at The Mazuma Stadium.

Both teams does not have a strong defensive line. Morecambe’s offensive side is also having an unimpressive form but they will have a chance to score at least one here.

Going on, Charlton has an offensive side that is scoring goals at a rate of 1.5 per game. So we can expect goals over 2.5 ft in this game.

It was said earlier about the defensive line of both the teams. They both have a defensive steel that leaks goal in a worrying fashion. Therefore, expect goals from both ends.

Considering all these observations, we expect a 1-2 win for Charlton at full-time on Saturday.