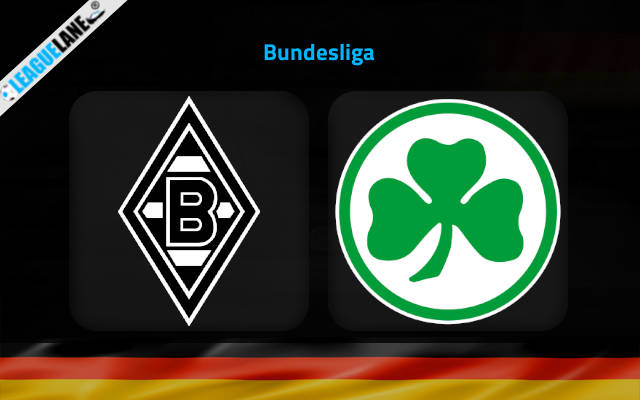 Greuther Furth own by far the weakest defensive record in this term of the Bundesliga. They lost nine straight league outings. They shipped nine goals in the last three defeats to Leipzig, Freiburg, and Eintracht Frankfurt. This should be an easy victory for Monchengladbach.

Borussia Monchengladbach will be heavy favorites to pick up their fifth win of the season on Saturday afternoon when they host the rock-bottomed Greuther Furth at Stadium in BORUSSIA-PARK.

Gladbach have played incomparably better at home than on the road so far in the season. They won three and drew two of five league fixtures in front of the home crowd.

Adi Hutter’s men have shipped only four goals in these five games. If we add the magnificent performance in the 5-0 drubbing of Bayern Munich in another home fixture in the second round of the DFB Pokal, we really get to understand the importance of the home court advantage for Borussia.

They might not even need one on Saturday against Greuther Furth who clearly lack quality to stay competitive at the highest level.

The visitors sit at the very foot of the Bundesliga standings with only one point from the opening eleven rounds.

They have been by far the worst team in the topflight so far in the season. They have lost all six away games this term, allowing as many as 20 goals in the process.

Tips for Monchengladbach vs Greuther Furth