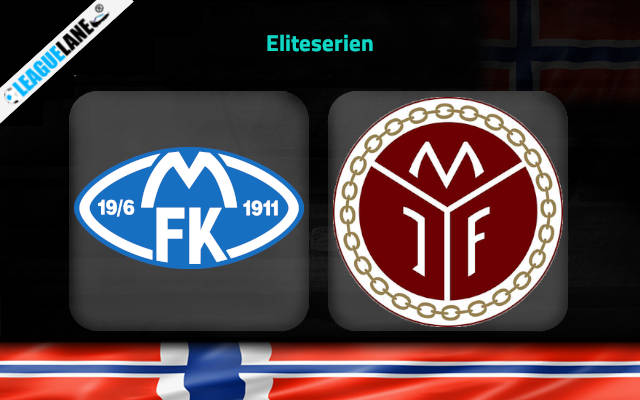 Molde take on Mjondalen in match week 18 as the hosts will look to bounce back from their 2-0 loss to Kristiansund which has made them slip in the league standings.

The hosts currently sit in 2nd place and they will be keen to win against their opponents. The home side have lost 2 games in a row now and they have 33 points in the bag, but they will be hoping that Bodo slip up at some stage in the season.

Molde come on the back of two consecutive defeats where they have lost 3-2 against Viking and 2-0 against Kristiansund. In the encounter against Viking, Birk Risa and Eirik Ulland Andersen scored in the first half of the game, but Viking had a comeback in them in which they scored 3 goals in the space of 25 minutes.

This was a confidence-breaker for the Molde side as they lost 2-0 to Kristiansund the following week. They have a good opportunity to pick themselves up and fight for the league title when Mjondalen come and visit them on Sunday evening.

On the other hand, the visitors are clearly struggling this season as they are in the relegation play-off zone with just 13 points on board after 17 league games as they currently sit in 14th place in the table.

The away side come on the back of a 2-1 loss to Lillestrom in a game in which Albin Sporrong scored in the 4th minute of the game before Lillestrom’s Tom Pettersson and Thomas Lehne Olsen scored on either side of the halves secured 3 points for the Canaries.

They have a very tough task in front of them to contain a Molde side that are determined to get back to winning ways.

Molde have conceded 9 goals in the last 3 league games. This shows that they don’t have a good defensive record of late and we back the odds at 1.75 for both teams to score.

Molde striker Ohi Omoijuanfo scored a hattrick against Haugesund in a game that ended 5-4 in favour of Molde. He will be eager to get on the score sheet after missing out on 2 games without scoring. As a result, we back the odds at 1.53 for Ohi Omoijuanfo to score anytime during the game.