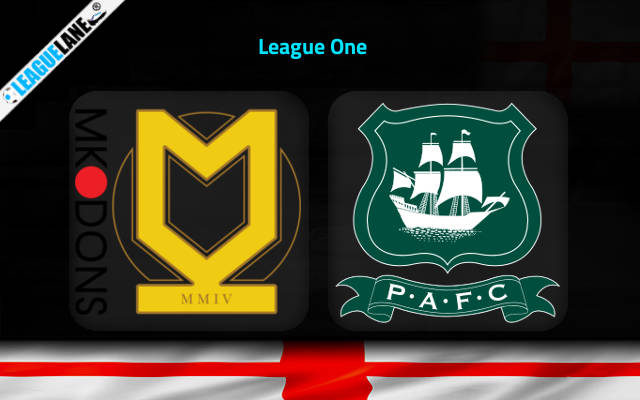 League One has reached game week 21 and the teams are right behind each other. This Wednesday, MK Dons will face Plymouth Argyle at Milton Keynes.

Plymouth Argyle is in the 4th position after 20 matches and has ended their no-win streak in their last match. The match was in FA Cup, against Rochdale and the match ended with 1-2 FT score in favour of Plymouth. Luke Owen Jephcott scored an 86′-minute goal which decided the game for the team.

League One is very competitive and both teams will look for scoring a win to gain an upper-hand against the opposition.

Milton Keynes Dons are in 6th position in the league table only after 19 games which is one less than Plymouth. They are just 2-points shy of the opposition and have scored 37 goals and conceded 24 goals in this League One season.

They are playing well this season with 10 wins, 4 draws and 5 losses to their name. 5 of these wins are from last 10 matches and scored 20 goals in these matches.The hosts also have an excellent record in their home ground with 6 wins, 2 losses and 1 draw.

Plymouth stays in the 4th position with 10 wins, 6 draws and 4 losses. The team is facing a no-win streak at the moment with 3 consecutive losses.They have faced only 2 losses in their away matches this League One season and 1 of the loss was in their last match against Charlton Athletic, which ended goalless for Plymouth.

MK Dons are playing well at the moment and will look to continue this momentum while Plymouth needs more wins if they want to stay above MK Dons in the table.