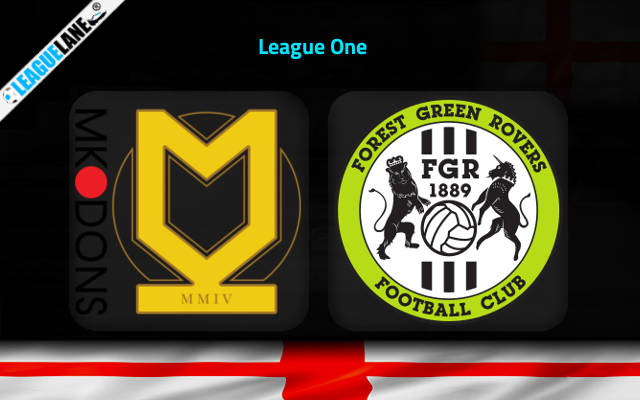 MK Dons vs Forest Green Predictions and Free Tips from our expert tipsters when the teams go head-to-head in League One on Monday, 26 December 2022.

Looking at the bottom five teams in the league, Forest have the best winning form. However, they could do nothing when they lost to Derby most recently. Their only victories were against Cambridge United and Cheltenham, these two teams are in the bottom half of the table.

Meanwhile, MK got their fifth win of the season as they defeated Portsmouth by 2-0. However, they struggled to perform against Leicester in the EFL Cup recently.

In the last five years, both teams have met three times. The host remain unbeaten on all three occasions.

Both teams last met back in 2019 and MK won that game by 2-1. Moreover, this is going to be the second time both teams will play against each other at Stadium MK after a period of more than four years.

Who will win the match between MK Dons and Forest Green?

MK Dons will take home all three points from this game. They recently defeated Portsmouth who are a decent team in the league. Moreover, Forest conceded a heavy 4-0 defeat against Derby most recently.

Not to mention that the host are unbeaten in the last three matches against this team.

The last two head-to-head meetings between these two teams ended with two goals combined. Both teams are in decent goal-scoring form in the league this month, with only few exceptions.

Both teams have scored in two of the last three meetings. When both these teams last played in Stadium MK the scoreline was 1-1. We can expect both teams to score

The host won by 2-1 when these two teams played back in 2019. Not only that they won by two goals when they played against Portsmouth in their most recent outing. Therefore, the first tip is that MK Dons will win this game by 2-1 – at 8.50 odd.

Our second tip is that Both teams to score – at 1.90. Both teams have scored a combined total of five goals in the last two overall head-to-head meetings.