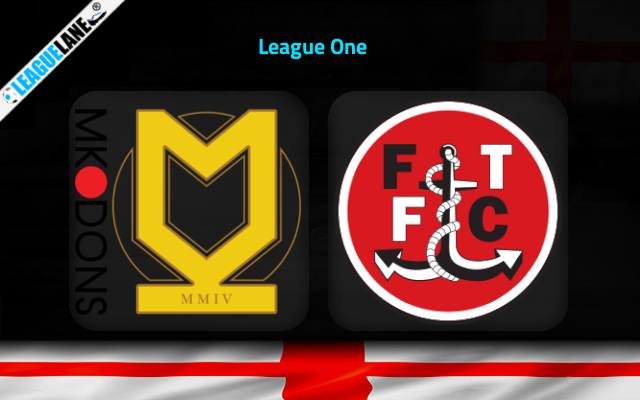 MK Dons vs Fleetwood Predictions and Free Tips from our expert tipsters when the teams go head-to-head in the England League One on Saturday, 10 December 2022.

MK Dons and Fleetwood are two teams who have had an inconsistent form since the beginning of this season. Neither of them have been able to win in the last four games.

MK Dons are on a four-fixture unbeaten streak against Fleetwood at present. The latest encounter between these two had finished in a 1-1 draw.

Both teams to score option is an often trend in the meetings between these two. Although MK Dons managed to evade a defeat in the previous three meetings at this stadium, they have allowed Fleetwood to net in four goals.

Who will win the match between MK Dons vs Fleetwood?

Although MK Dons have had a poor performance overall, they have seen an impressive pickup lately at home. They have managed to win three of their last five home matches.

On the other hand, Fleetwood is winless in their last five away matches. In addition, they have not been able to win in the last three games at this stadium. Therefore, we expect MK Dons to seal a win this Saturday.

Over 2.5 goals were scored in the last two meetings between these two at this stadium. In addition, three of the previous five home matches involving MK Dons have seen goals over 2.5.

Since neither of these two sides are in possession of a good defensive line, there is nothing wrong in expecting goals from both ends.

For all the above reasons, we are of the view that MK Dons will end up sealing a win when the referee blows the final.

However, it won’t be a one-sided affair and goals are likely to be scored by both ends at Stadium MK.