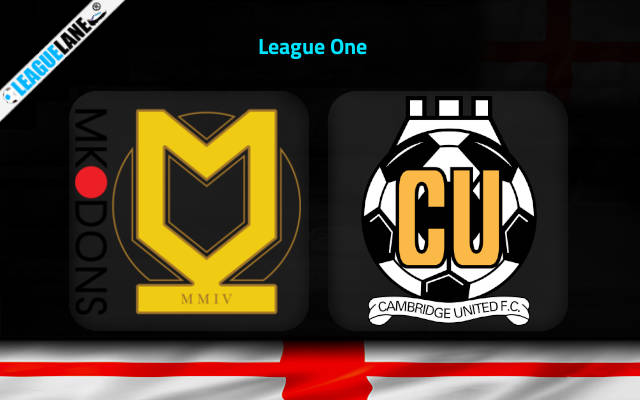 Milton Keynes Dons and Cambridge United, both are teams that are sitting just outside of the top 6 and are pushing for a spot in the playoffs or beyond at the end of the season.

This is an impressive position for the teams to be at considering the hosts finished mid-table in League One last season while the away team are looking for back to back promotions as they were promoted from League Two at the beginning of the season. Read our Preview, Predictions, and Betting Tips with Analysis here.

The Dons had an excellent start to the season and were once on an 8 match unbeaten streak. Things however have not been going according to plans lately as they have lost 3 of their last 5 league games.

In their most recent league fixture, they beat Crew Alexandra 4-1 on the road following their devastating 3-0 loss to 3rd place Rotherham at home.

They currently occupy the 7th position in the league with 25 points to their name coming through 15 matches in the league. They are two points behind a spot in the playoffs. However, they have a game in hand over the top 4 teams in the league.

United on the other hand has been tearing up the league in their first season back up in the division. They have lost just 4 matches this season and have registered several convincing victories and crucial draws.

They are currently 10th in the league with 22 points to their names coming through 5 wins and 7 draws. In their preceding league fixture, they defeated Morecambe 2-0 on the road.

The visitors have been excellent this season for a newly promoted club but they have struggled in away games with just 2 wins on the road. The hosts have been convincing at this venue with just 1 loss in their last 6 matches.

Considering the teams’ home and away forms and a hugely one sided h2h record we were unable to back the visitors to win any points from this fixture.
Both teams have conceded too many goals considering their positions in the table. The teams have also seldom failed to find the back of the net at least once in a game. Hence I have backed both teams to score in a game that should see a minimum of 3 goals.