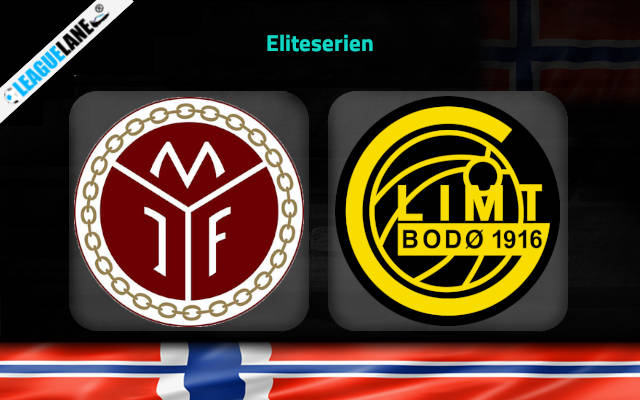 Bodo/Glimt is to face Mjondalen in their last match in Eliteserien this Sunday, at Consto Arena.

Bodo/Glimt are in the top position of the league table and has a chance in direct promotion to Champions League if they win this upcoming match. Their last match was in Europa Conference League against Zorya, ended in a draw with both teams scoring one goal.

Mjondalen are dead last in the league with only 22 points from 29 matches. Even if they win the next match, the team has no chance to avoid relegation. The team has 4 wins, 10 draws and 15 losses currently in the season. Their last match against Valerenga ended in a loss for the team with 2-0 FT score.

It will be the second time in this season, both teams will face each other. Mjondalen, as mentioned earlier, has no chance of avoiding relegation, while a simple draw in this match is enough for Bodo/Glimt to qualify for the Champions League.

Mjondalen has only 2 wins from their last 10 matches which show that the team has constant draw or loss in the tournament. The hosts currently have scored 33 goals but have conceded 49 goals in Eliteserien.

The hosts have 2 wins, 5 draws and 7 losses in their home ground. However, the team has scored in 12 of their home matches.

Bodo/Glimt is unbeaten in their last 17 games. The hosts have only lost 3 matches in the tournament and they have also scored 56 goals while only conceding 25 goals.

The team has also not lost in their last 9 away matches. Their last away match against Rosenborg ended in a draw with 0-0 FT score. This is the only game in the last 6 games, where the team has not scored a single goal.

The visitors have more chance than the hosts, to win the next match. Bodo will look to end the season with an 18-game unbeaten streak in their name.