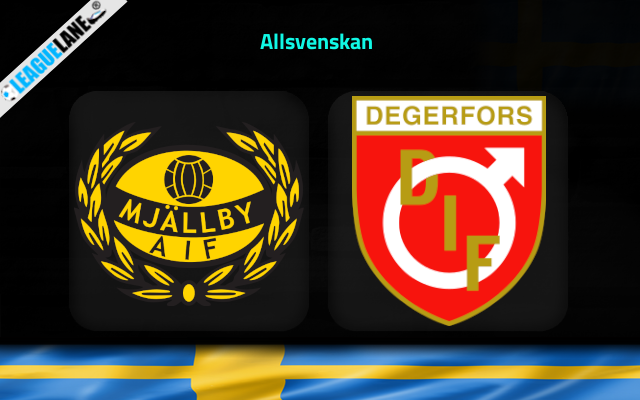 Mjallby have opened up this season’s fixtures with decent momentum. They recorded impressive outcomes in the beginning but failed to maintain the consistency further. Currently, their form is inconsistent and have pushed themselves to the 10th spot of the table.

Meanwhile, Degerfors had an unimpressive start to this season. They recorded a set of negative displays consistently to push themselves down to the 15th spot on the table. Their form is as worse as that of the bottom spot occupier Helsingborg and what keeps them above the bottom is their two positive recordings so far this season.

We can see Mjallby recording a 1-1 draw on the road against Goteborg in their most recent league fixture. It was their seventh winless recording in the past eight league outings. Therefore, they will be hoping to seal a positive outcome to have some momentum.

At home, Mjallby possesses a different form. They are unbeaten in six of the 7 league fixtures played at home so far this season. Their only defeat was against the current top spot occupier Hacken. The match ended up in a 1-2 defeat for them.

On the other side, Degerfors recorded a 2-0 defeat on the road against Sirius in their most recent league fixture. The above defeat have recorded a winless streak of six league games for them. Also, they have conceded 10 defeat out of their 14 league fixtures so far this season.

Degerfors have a pathetic form on the road. They have not displayed a better outcome since the beginning except for a 2-3 win recorded before their most recent negative set of three losing games on travels.

Analyzing all the above stats, we are left to back Mjallby to seal a win from this fixture against Degerfors.