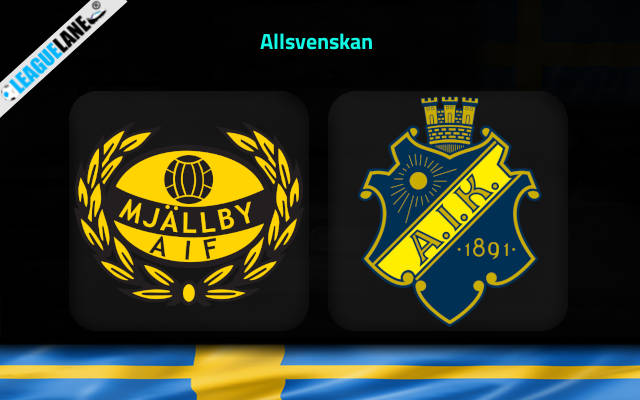 Mjallby welcome high-flying table toppers AIK at the Strandvallen as the visitors will look to pounce on their hosts as they aim to continue their run to the league title.

The hosts currently sit in 14th position in the league table with 15 points on board after 17 league games. Their form has not been stable throughout the season and that is why they find themselves in the relegation zones.

In their previous league game, the hosts won 2-0 against Degerfors in a game which saw Kadir Hodžić and Amin Sarr get on the score sheet in the 34th and 71st minute of the game. That game also saw Mjallby have 44% of possession as they had 13 attempts on goal with 5 on target.

On the other hand, the visitors don’t need any explanation for how good they have been this season. AIK currently lead the league as they sit on top of the table with 36 points onboard after 17 league games, 2 points above their closest rivals Djurgarden who sit in 2nd place with 34 points.

The visitors have won their previous 5 league games and this sudden surge of AIK in winning has put them on pole position to win the league.

In their previous league encounter, AIK managed a 2-0 win over Orebro in a game which saw defender, Alexander Milosevic score a goal in the 17th minute while an own goal from Orebro’s center-back, Nasiru Moro in the 30th minute helped AIK register yet another winning in this fine form that they are going through.

Table topper AIK are expected to continue this winning streak that they have found at the right time and they are set to extend their winning run for 6 games as the hosts will not have much to contain the attacking threat of the away side.
Hence, we back the odds at 2.00 for AIK to win.

On the other hand, AIK have shown decent defensive performances in the recent past and Mjallby lack the threat and quality in front of goal to trouble the AIK defenders. Hence, we back the odds at 1.80 for both teams not scoring in this game.