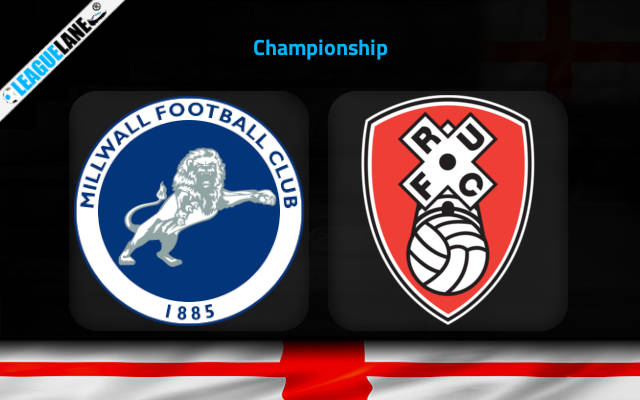 Millwall vs Rotherham Predictions and Free Tips from our expert tipsters when the teams go head-to-head in Championship on Sunday, 1 January 2022.

Millwall proved their critics wrong as they defeated Watford back in December. They have a bright form at home as they are on a six-game unbeaten streak at The Den. They will face Rotherham for their first game of the year.

On the other hand, Rotherham needs to focus on not losing any more points in their January fixtures. They are very close to the relegation zone and have a fragile away form.

Millwall are unbeaten in this fixture in the last three years. Do also note that the last time the visitors won at this ground was over eight years ago.

In 2022 both teams played only once which was in October. The game ended in a 1-1 stalemate at that time. The host have won two of the last three head-to-head meetings.

Who will win the match between Millwall and Rotherham?

We are backing Millwall to take all three points from this game. They are the favourites to win as they are unbeaten in the last four consecutive head-to-head meetings. Not to mention that they won this fixture at The Den last time.

The visitors have lost their winning form since late October. The last time they won an away game was on the 8th of November.

In the last four years, this fixture has been a low-scoring one. Not more than two goals have been scored in the last five head-to-head matches between these two teams.

The first tip is that Millwall will win both halves of this game– at 2.75 odd. The host have won both halves in their last two victories against this team. The same trend is also observed at The Den.

Our second tip is that Zian Flemming to score anytime – at 3.20. He scored two goals in his last two appearances. He scored a crucial goal against Watford back in December.