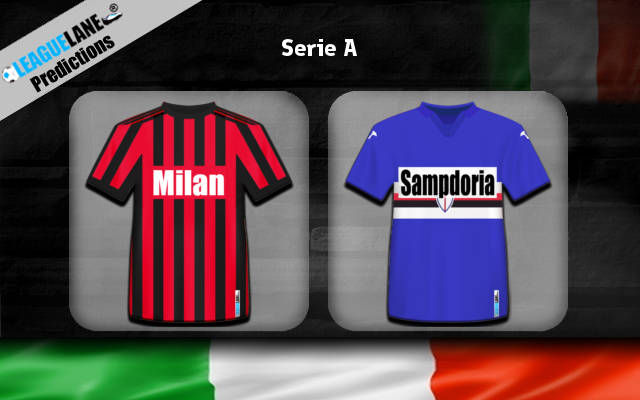 With influential wing-back Theo Hernandez back in the team and Zlatan bound to play, AC Milan will be looking to make amends for a horrific performance at Gewiss Stadium and get closer to Europa League spot.

The Rossoneri’s unbeaten run came to an abrupt end as they fell to a humiliating 0-5 defeat to Atalanta in Bergamo. Prior to that, Stefano Pioli’s men defeated the Emilia-Romagna duo Parma (1-0) and Bologna (3-2), together with two home draws vs Napoli (1-1) and Sassuolo (0-0). With the W-D-L record of 6-3-8, Milan are 11th on the ladder.

Paolo Maldini and Zvonimir Boban kicked off January transfer window with a bang by signing Serie A legend Zlatan Ibrahimovic and I fully expect him to play on Monday. ACM have already arranged a friendly game vs local side Rhodense to get him into the rhythm.
Leo Duarte is three months away from full fitness, everyone else is available.

Sampdoria remained 17th in the Serie A standings following a 1-2 home defeat to Juventus prior to mid-season break.

The Blucerchiati enjoyed a four-game unbeaten spell in November but lost four of their five games across competitions since then. With 15 points to their name, Samp are tied with Lecce and one point above the pit.

Claudio Ranieri’s side have logged two wins and six losses away from home, averaging a goal scored per bout whilst conceding two per match.

Barreto and Bertolacci are surely out with injuries, Ferrari is questionable and Caprari is suspended.

With influential wing-back Theo Hernandez back in the team and Zlatan bound to play, I’ll back AC Milan to make amends for a horrific performance at Gewiss Stadium and get closer to Europa League spot.

As for my second bet, I have a gut feeling Ibrahimovic will get on the scoresheet on his second debut for the Rossoneri and I’ll back him to net anytime, but please check the official lineups first, an hour before the kick-off. Good luck!

To all Italian Serie A Match Previews & Predictions