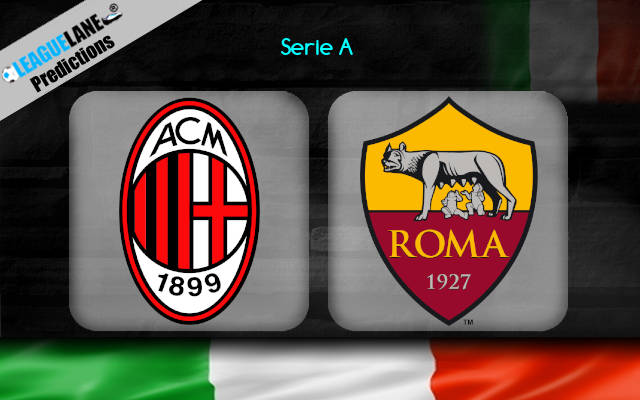 Perfect season for AC Milan continues; the Rossoneri are the only team in Serie A which maintained 100% win rate after four rounds. Besides phenomenal performances on the domestic scene, they also started Europa League campaign with a victory on rough away day against Celtic FC.

There is another derby game ahead for AC Milan, as they are facing AS Roma on Monday night. This duel is also going to wrap up the 5th round of Serie A, and we are expecting to see a true spectacle.

In terms of the odds, hosts are marked as warm favorites for the win at 2.20 odds.

These two teams have a long history when it comes to head to head matches. There was total of 56 encounters so far, and the score is tied at 19 victories each, plus 18 draws.

AC Milan have much better stats when it comes to Giuseppe Meazza duels, having won thirteen duels, and losing only seven.

The most recent meeting took place in Milano as well, in July this year. Rossoneri celebrated 2-0 victory thanks to the goals of Ante Rebic and Hakan Calhanoglu.

AC Milan are playing above expectations in this new football campaign. Zlatan Ibrahimovic has led the team last weekend in big victory against Inter Milan. Derby Della Madonnina ended 2-1 in favour of Rossoneri.

Just a couple of days after they faced Celtic in Glasgow in Europa League premiere. Rade Krunic got a chance in the starting roster and finally scored his first goal for AC Milan. They won the match 3-1.

The only small concern for Stefano Pioli is that defensive line kept only two clean sheets in the last six outings.

AS Roma were also involved in mid-week Europa League action. They defeated champions of Switzerland, team Young Boys in Bern despite being down by one goal. Bruno Peres and Kumbulla scored goals in the second half.

In terms of domestic campaign, Roma had a slow start, collecting only seven points from four matches. The best performance so far was in a 2-2 draw against Juventus at home. Backing goals in this Monday’s encounter is the safest option to go.