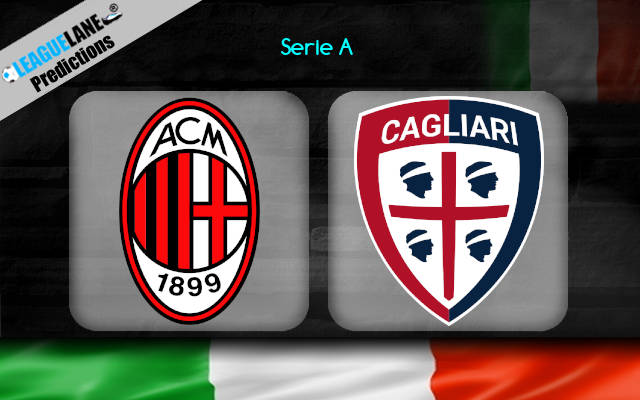 Milan will be aiming to complete the perfect week on Sunday evening when they play host to relegation-threatened Cagliari in the penultimate Serie A round.

Milan produced the best performance of the season on Wednesday evening when they bagged seven unanswered goals past Torino.

Ante Rebic took advantage of starting as the lone striker as he completed a hat-trick on the occasion. The Croatian forward will thus enter this fixture in the highest of spirits and we would not be surprised to see him unlocking Cagliari’s defense with ease on Sunday.

Milan have thus made a huge step towards securing their place in the top four at the end of the season by winning three Serie A ties in a row.

They’ve been brilliant, scoring 12 and conceding no goals at all in the process. Stefano Pioli’s men are now three points clear off the 5th-placed Juventus and a win here would further push them towards the elite continental competition football next season.

However, Milan will have to be at their best to achieve their goal on Sunday. They are about to take on Cagliari who will travel to Stadio Giuseppe Meazza encouraged with a run of six successive Serie A outings without a defeat.

Cagliari and won four and drawn two in the process, significantly improving their defensive performances in the last couple of fixtures. They kept a clean sheet in a goalless draw against Fiorentina on Wednesday evening.

Cagliari did not score a single goal in the last four matches against Milan. Knowing that Milan did not concede at all in three successive Serie A outings going into this tie, the home win to nil looks like a fantastic betting option at the 2.50 odds.

We expect the hosts to dominate from the very first whistle to the end, encouraged by the recent successes. The alternative pick will be Milan to have the lead at the half time and win the match at the end at the odds of 2.10.