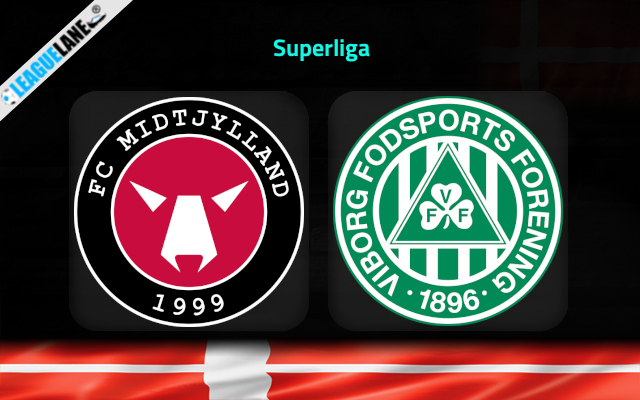 Midtjylland will finally be looking to pick up a victory in the elite class of Danish football on Friday evening when they host Viborg in the 20th round of the competition.

If we count the first half of the season, Bo Henriksen’s men are winless in five straight matches in the league.

They finished last year with two losses and a draw, failing to improve the form at the beginning of 2022.

Midtjylland fell 0-2 at home to Aalborg in the first game of the year, while they followed it up with a disappointing 2-2 draw away at Odense on Sunday.

Also, the draw came only thanks to the late stoppage-time equalizer from substitute Vagner Love on the occasion.

To make things worse, Midtjylland ended their campaign in the UEFA Europa Conference League after a 3-1 loss at PAOK eight days ago in the reverse fixture on Greek soil (after extra-time).

We can thus clearly discuss the team’s lack of defensive meticulousness as Midtjylland allowed at least two goals in each of the last three outings across competitions.

It will be very interesting to see how Henriksen’s players will react on Friday when they come face to face with bottom-half Viborg aiming to pick up the maiden league win in the last six rounds.

The visitors began the year with a 0-1 victory at Randers but they fell 0-2 at home to Copenhagen last weekend.

However, it is very important to mention that Viborg have lost only one of nine away fixtures in this term of Superliga, scoring 17 goals in the process.

The bookmakers see Midtjylland as 1.60 favorites to win this, but the value is nowhere to be seen with this betting option. The hosts are winless in five straight league games and they have been shipping goals for fun lately, across different competitions.

On the other side we have Viborg who have lost just one away game since the beginning of the season. We will back the visitors not to lose at the 2.25 odds as the main betting option here.