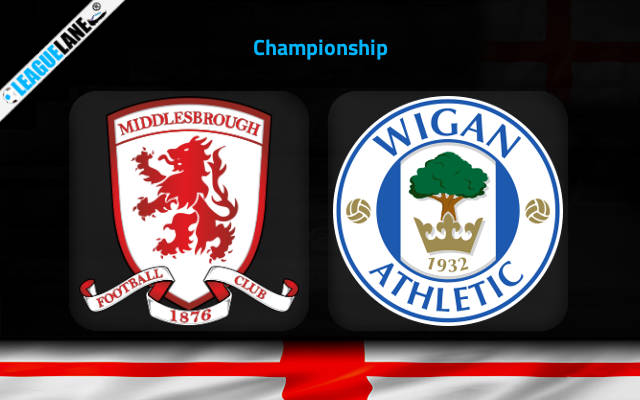 Middlesbrough vs Wigan Predictions and Free Tips from our expert tipsters when the teams go head-to-head in Championship on Monday, 26 December 2022.

Middlesbrough lost their ninth game of the season as they could not get past league leaders Burnley. Now they are at the middle of the table. The main advantage for them is that they have a decent unbeaten record at their home ground.

At the same time, Wigan’s season is beyond recovery and they are fighting a relegation battle at this stage of the season. Similar to their counterparts, they lost their most recent game against Sheffield United.

The team led by Michael Carrick have a solid unbeaten record against Wigan since 2008. Both teams last met in October of this year and the host won that game by 4-1.

At this ground, the host are on a three-game winning streak. It is worth knowing that Wigan have not won an away game since October.

Who will win the match between Middlesbrough and Wigan?

Middlesbrough have a better chance to win this fixture. The main reason is point separation, as both teams are separated by six points on the table. Also, the second reason is that they are unbeaten in the last six head-to-head encounters at this ground.

Middlesbrough have scored at least two goals in the last two head-to-head encounters.
Therefore, we can expect over 2.5 match goals combined for this upcoming fixture.

In recent times this fixture has seen plenty of goals from both teams. Past record shows that both teams have scored in this fixture for the last two years.

The host are unbeaten in four of their last five outings. Not only that, they won this fixture on three consecutive occasions at Riverside Stadium. Therefore, you can back the following as our first tip is that Middlesbrough will win this game by 2-1– the odd for this tip will be at 8.50 odd.

Furhermore, our second tip is that Over 2.5 goals will be scored– at 1.80. Both teams have scored a combined total of nine goals in the last two meetings.