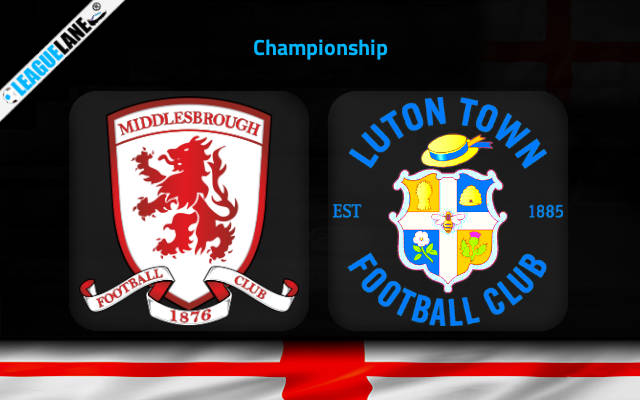 Middlesbrough vs Luton Predictions and Free Tips from our expert tipsters when the teams go head-to-head in Championship on Saturday, 10 December 2022.

New manager Michael Carrick has started delivering as his team are picking up the good form. Middlesbrough are on a two-game winning streak.

On the other hand, Luton are not in good shape as they have won once in their last five outings. The only positive result they picked up was the narrow 1-0 win over relegation side Blackpool which was over a month ago.

The host have won at home against Luton in three of the last four occasions. Both teams last met in March this year and the host won that game by 2-1. Luton have won only once in the last three meetings at Riverside Stadium.

Who will win the match between Middlesbrough and Luton?

More than 40% of the matches have ended in a stalemate for the visitors. No other team is having such a record. On top of that, they are winless in five of their last six outings. Therefore, we can expect Middlesbrough to take home all three points from this match.

It is worth knowing that the last time the host lost a league match was way back in October. Now they are in good shape following Michael Carrick’s appointment as manager.

The last two meetings ended with over 2.5 goals combined. On top of that, the host scored three goals past Blackpool recently. We can expect the same trend to continue this time as well.

Both teams have scored consistently starting from 2021. Also, they have both scored a combined total of nine goals in their last three matches. Therefore, the chances are high that both teams will find the back of the net this time as well.

At Riverside Stadium, the host are a different team. They have registered three wins in their last four meetings. We can back the host to win this fixture. As their opponents have not been consistent. They have lost two of their last three away games.

Therefore, the first tip is that Middlesbrough will win – at 1.85 odd. They remained unbeaten in the last eight meetings.

Our second tip is that Over 2.5 goals with Both teams to score – at 2.40. Both teams have scored consistently in their last three overall meetings.