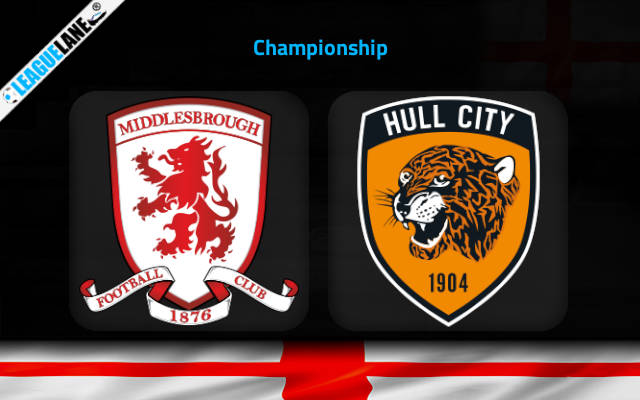 With 12 places and 21points in the difference, Middlesbrough will be hosting The Tigers at Riverside Stadium, this Saturday for the 41st Round of EFL Championship.

The Boro is at the 7th spot on the standing with 62 points from 39 games. They won 18 times in the league while drawing on 8 and losing on 13 other occasions. The hosts have won and lost twice of their last 5 fixtures and need only 3 points to fall into the Play Offs zone.

Middlesbrough won’t want a repeat of their last result here after the 0-1 Championship loss against Fulham. In their last 11 home games, The Boros have been undefeated on 9 occasions.

On the contrary, Hull City resides at the 20th position on the table with 41 points. Of the 40 matches played, they won 11 games while drawing on 8 and losing on 21 other occasions. In all of their 3 most recent away matches across all competitions, the visitors have managed to maintain a clean sheet.

Hull City lost back to back league fixtures against Luton and Huddersfield. The trend of at least one team not managing to score in games involving the Tigers has been apparent in recent matches. Checking on their last 6 outings, reveals that it has happened 5 times.

Hull City have won just twice of their last 12 matches across all competitions. But they remain unbeaten in their previous 5 away league fixtures.

Meanwhile, Middlesbrough have lost only once of their last 22 home league games against Hull City, losing 2-1 back in March 1986 under Bruce Rioch. But the Boros remain winless against Hull City in their previous 3 league matches.

In their last 11 home games in all competitions, Middlesbrough have been undefeated on 9 occasions.

Knowing that, we expect the Boros to seal a win against this Hull City, this Saturday.