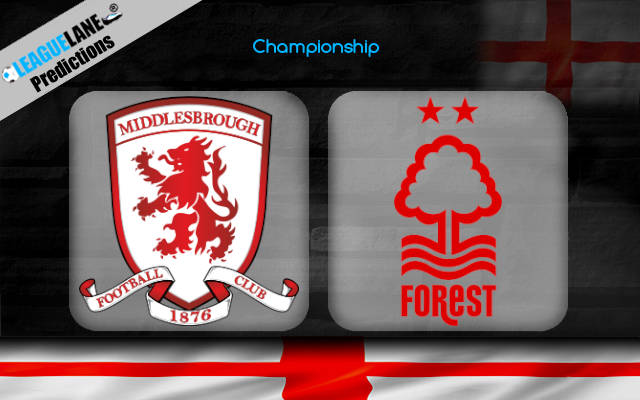 Middlesbrough put a somewhat troubled start of the campaign behind them and earned 11 points in their last five outings, hosting Nottingham Forest in a good mood and hoping to challenge the top 6 – as they sit a point behind 6th placed Bristol City in a tight chase still early in the new campaign.

Boro beat Coventry (2-0) on Tuesday with late goals from Assombalonga and Spence, showing off as a tough side to score against once again. They kept clean sheets in three of their last four outings since mid-October, which promises another such setup at Riverside on Saturday afternoon. Neil Warnock’s men based their success on such displays here and it’s hard to make a case for anything different now.

Nottingham have earned all of their six points in their last four outings, as they beat Blackburn (0-1) and held off Rotherham (1-1), Derby (1-1), and Luton (1-1) since mid-October. They’ve been scoring goals on the regular but struggled to keep clean sheets, which will be worrying ahead of the trip to Middlesbrough – despite seeing Taylor, Lolley, and Ameobi all finally start delivering in the final third.

Middlesbrough haven’t beaten Nottingham since April 2018, when they bagged the points in a 2-0 win at this ground.

We’ve seen goals on both ends on both occasions last term, with a 1-1 draw in Nottingham and a 2-2 draw at this ground.

We will thus back Middlesbrough to finally connect two wins in a row this term, going for a Home win at 2.37. We have seen them tough defensively and we hope to see another such display on the day, which would surely mean hands full for the Tricky Trees. Still, this should make for a tight contest and we’re thus going for few goals as well.

With that in mind, we’re going for Under 2.5 Goals FT at 1.61. Nottingham have been scoring goals but we expect a tougher challenge now. We feel Boro have what it takes to secure the points but a lot could depend on the defensive setup on the day.