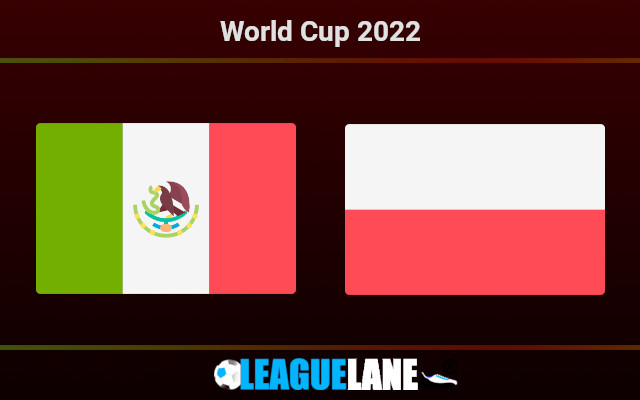 Mexico lock horns with Poland in a six-pointer that decides the second best team in the Group C of FIFA World Cup 2022.

Mexico is a tough group, but will fancy themselves to make it through having done the impossible in the previous editions of the competition.

Last time, they earned the biggest scalp by defeating defending champions Germany 1-0 making it six consecutive wins on matchday 1 of the competition.

This is their eight consecutive appearance at the global stage after serving a ban for the 1990 edition for fielding an overage player at the Olympics.

El Tri have qualified for the knockouts in each of the previous 7 times however they are yet to make it beyond the round of 16.

Under Tata Martino, Mexico have transformed into a fluid attacking unit with high pressing defense and could prove a handful to the likes of Argentina and Poland.

Poland in search of a confidence boosting win

With all the talent they got, Poland are yet to make their mark in cup competitions. Probably, this is Lewandowski’s last major tournament and he will be keen to change the fortunes of the national team.

Group stage exits have been a common story for the men in Red and White and they recently finished at the foot of the table without a win in the Euro 2020.

This is only their ninth overall appearance at the World Cup and four of them happened between 1974 to 1986.

In the last edition, they were favorites in the group that involved Colombia, Senegal and Japan, yet finished at the foot of the table.

To make things worse, the Poland national football team is going through a turbulent period especially after the surprise exit of head-coach Paulo Sousa. This was followed by the controversial appointment of Czeslaw Michniewicz.

Anyhow, Michniewicz has helped the team to beat Sweden in the qualifying play-offs to earn a ticket to the competition and come to Qatar in good spirits having won 4 of the 9 matches along with 2 draws and 3 losses.

This will be a tight clash by all means, the importance of this fixture is nothing but a potential spot in the knockout phase.

Poland definitely has the quality in their squad, but they often fail to stand out in major tournaments. This is why we are going with Mexico in this fixture and the over 2.5 goals at full-time is a decent option considering the attacking potential of both sides involved.