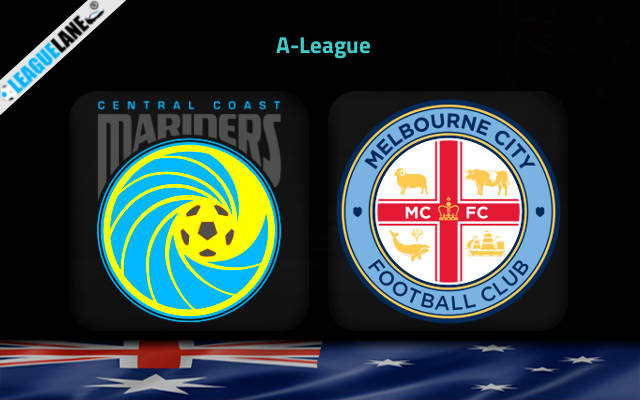 Melbourne City suffered their maiden defeat of the season two weeks ago when they fell 2-1 away at Sydney.

The Citizens were not in action last weekend as their city derby against Melbourne Victory got postponed.

They are still at the very top of the A-League Men standings with a record of five wins, one draw, and one loss in the inaugural seven matches of the season.

The team led by Rado Vidosic will be looking to return to winning ways on Tuesday when they play host to Central Coast Mariners at AAMI Park.

This will be a tough test for the hosts because their counterparts go into the game in the highest of spirits after winning two games in a row.

The Mariners bagged five goals in the successive victories over Sydney and Newcastle Jets. They boast the league’s best scoring record with 18 goals in 8 outings.

We’ve seen that Melbourne City’s defense (although the joint-best in the country at the moment) can be vulnerable in their previous match and we would by no means be shocked to see the visitors on target on Tuesday.

This will also be the clash between two prolific goalscorers. Jamie Maclaren is the league’s top scorer by a mile with nine goals to his name in seven games.

Jason Cummings is third in the league’s goal-scoring charts with his four goals for the Mariners.

You have to expect goals in the clash between the top and the third scorer in the competition’s goal-scoring charts. Melbourne City had an extra week to recover from the surprising loss at Sydney and we expect them to rebound at their AAMI Park.

The main pick is Melbourne City to win & Both Teams To Score at the 3.20 odds, while we will also go with the league’s best scorer Jamie Maclaren to score anytime for the hosts at the 1.61 odds.