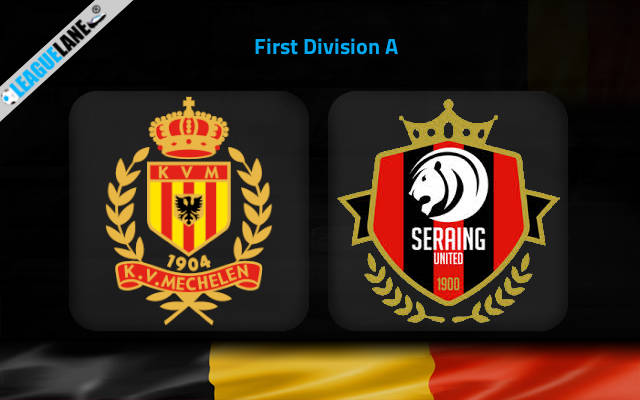 Having lost all their fixtures in December, Seraing is now in a battle against relegation. With not much separating them from a mid table spot, the side would be looking to gain some points under their belt.

Mechelen have not performed much better either, as they have fallen behind in their race for European competitions.

These two clubs will lock horns at AFAS-stadion Achter de Kazerne this Monday evening in a Belgian Pro League fixture.

Malinois lost their most recent game away from home against another team battling relegation, Zulte Waregem.

This marked their 3rd loss in five games. Having managed a win and a draw from those fixtures, the club is 8th position in the league table.

7th place Kotrijk claimed all three points in Seraing’s most recent fixture by a score line of 0-2 away from home. This marked the 4th consecutive loss of Seraing in league fixtures.

They beat Waasland-Beveren by a 6-3 aggregate score line in the playoffs, following a 2nd place finish in the second flight of Belgian football last season. Consequently, the club were promoted from First Division B at the start of the season.

With just 3 points to show for in 5 league fixtures, the side is now in the relegation play offs spot, just a point behind 16yh place Zulte Waregem.

Their only previous meeting ended with a 1-0 loss for De Kakkers earlier in the year.

The hosts may not be in the most convincing of forms. However, with just a loss and 5 wins in their last eight league fixtures at home, the club should deliver with the 3 points on Monday. To further add to things, do not expect much resistance from a side on a five-match losing streak across all competition.

The hosts have scored 35 and conceded 37 goals already in the season. Furthermore, the away defense has conceded two goals on average per fixture this season. Anything but a low scoring fixture should be expected from this fixture.