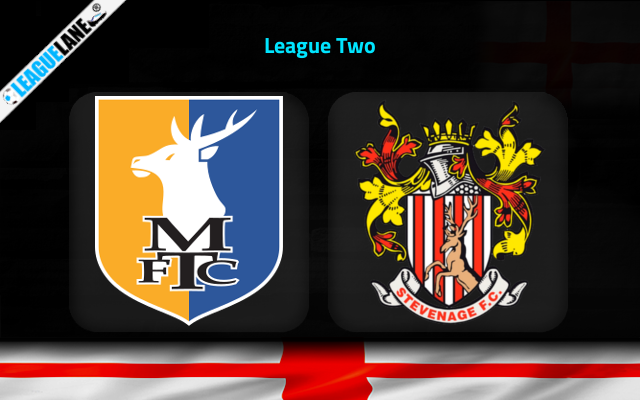 Mansfield sits 10th on the table with a total of 56 points in hand. They have an inconsistent form in the league of late. They have collected 7 points from the past 5 league fixtures to add up to a total of 56 points. They will be hoping to find a spot inside the safe zone which is currently 4 points away from them.

Mansfield recorded a 3-1 defeat against Port Vale on road in their most recent league fixture. They are now on the back of two subsequent league defeats. However, they will be motivated enough to gain back their momentum by sealing a win from the coming league fixture.

Meanwhile, Stevenage are on the verge of the relegation picture. They have a dreadful form in the league since the beginning. They owns a pathetic defensive lineup.

Stevenage were last seen on a League Two match-day against Northampton. The match ended up in a 1-2 defeat fro them. With that defeat, they are now on the back of 9 consecutive winless league fixtures.

By the looks of things, we expect a pleasant day for the local supporters at One Call Stadium on Saturday when Mansfield play host to Stevenage in a League Two fixture.

Mansfield possess the best home form in the league currently. They have won each of their past 10 league fixtures at this venue. Their offensive side have been getting stronger and stronger of late.

On the other side, have only won once on road since the beginning of this season. They can’t stand a chance with such a pathetic on road recording against this Mansfield outfit who possess an excellent spell of form wearing the home jersey.

Therefore, we back Mansfield to seal a comfortable win over this Stevenage outfit when the referee blows the final whistle.