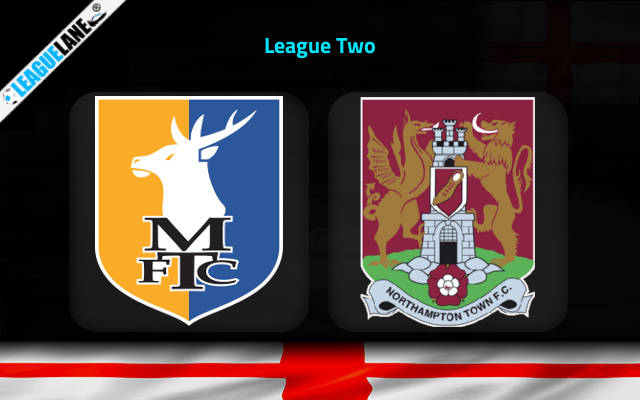 Northampton Town earned the top berth in the League Two promotional playoffs thanks to a strong finish of the regular season and a streak of four wins and a draw in the last five games of the campaign.

They ended the regular season fourth in the League Two ladder and will battle the seventh-placed Mansfield Town over two legs for a place in the playoffs final.

The first semifinal leg will be played on Saturday evening at One Call Stadium where Mansfield Town will be the favorites thanks to their fantastic record on the home patch in the regular season.

The team led by Nigel Clough actually possess the best record on the home turf out of all teams in the League Two, including the three automatically-promoted sides.

They won 15, drew 4, and lost 4 of 23 league outings in their own backyard this term, scoring 40 goals in the process.

However, we must say that Mansfield have shown signs of defensive liability in the last couple of rounds as they played back-to-back 2-2 draws to the likes of Salford and Forest Green.

The hosts might struggle to keep things quiet at the back here against Northampton whose played seem to have found their shooting boots at the very end of the regular campaign.

The visitors bagged at least three goals in three of the last four league matches. The run includes a 1-3 victory over Barrow last weekend on the final day.

Mansfield are a force at One Call Stadium and we see them taking advantage of the home turf to gain the edge ahead of the reverse fixture at Sixfields Stadium.

However, since Northampton Town have been also quite inspired in the final third recently, we will also back the Both Teams To Score bet at the attractive 2.00 odds.