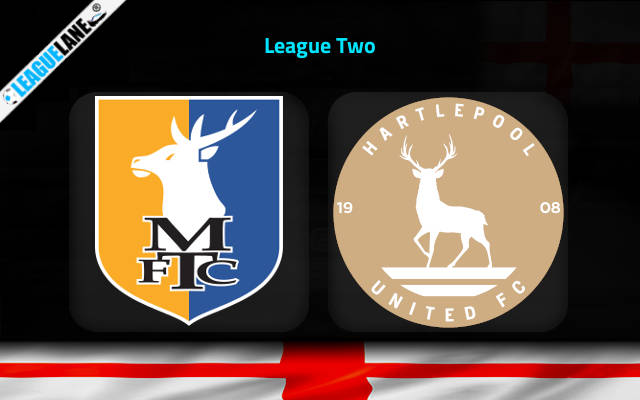 Seldom have they lost during the course of this campaign, and they lost just once in their past five fixtures. They are finding the back of the net in plenty, and are absolutely going after a podium spot.

It also needs to be mentioned that they are on a good streak of results at home, and have built quite some momentum as a result.

Meanwhile, not only are Hartlepool placed 24th in a table of 24, but they are also the only squad yet to register a win in the whole competition.

Moreover, they conceded the most number of goals of all the teams in the league, and only one other squad scored fewer than them in the tournament.

In addition, they have a 100% losing record on the road, barring a draw against the 21st placed Colchester.

And on top of all this, Manfield have a superb h2h record against this foe over the years, and taking into account all these observations, expect a win for them this Friday.

Manfield were unbeaten in seven of their past nine overall fixtures, and in the process they registered six wins. Do also note that they recorded two separate two-game winning streaks in the process.

Moreover, they lost just four times at home in the past ten months.

On the other hand, Hartlepool are on a 5-fixture winless run, and they remained winless in 15 of their past 16 matches. Do also take note that they failed to find the back of the net in the past three fixtures.

Considering these observations, expect a win for Mansfield this Friday.

Tips for Mansfield vs Hartlepool