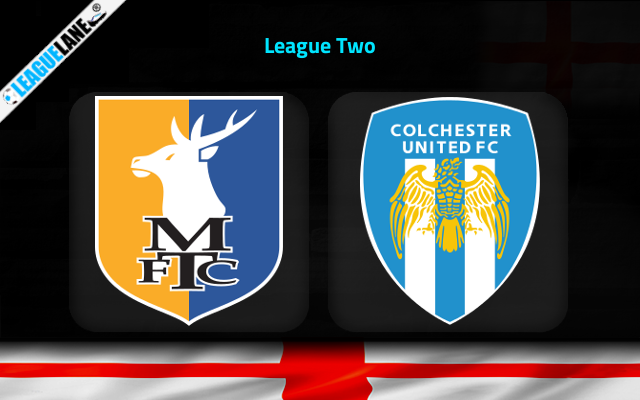 The League Two match at One Call Stadium on Saturday will see hosts Mansfield go into the battle with Colchester.

The bookmakers see the hosts as favorites for the win, pricing them at 1.90 to claim the spoils here. It is very easy to understand why because Mansfield are in far better form than Colchester at the moment.

You can further understand by looking at the current positions of both the teams. Colchester are in 22nd place, 14 spots below Mansfield in 8th place with 30 points.

Colchester are level on points with Gillingham in the relegation spot. So they will have to enter the danger zone if they fail to get points in the coming league fixtures.

Although Mansfield currently shows a slight inconsistency, it is unlikely to affect their spirits as Colchester do not possess the form to beat them.

Apart from that, despite having a poor defensive line, Mansfield have an offensive side that has performed well to avoid the negative goal difference.

Going on, although Mansfield have lost their last two home matches against two teams in the current top seven, they have scored goals in both of those fixtures. Also they have an unbeaten run of form barring those two defeats so far in the season.

This is a fixture where Mansfield can get a win, which might make their fans pleasant after their disappointment in the past two home fixtures. Their defensive line might allow one but it won’t be more than that of what their attacking side scores when the referee blows the final.

For all the above reasons, we expect a both teams involving affair with Mansfield sealing a victory.