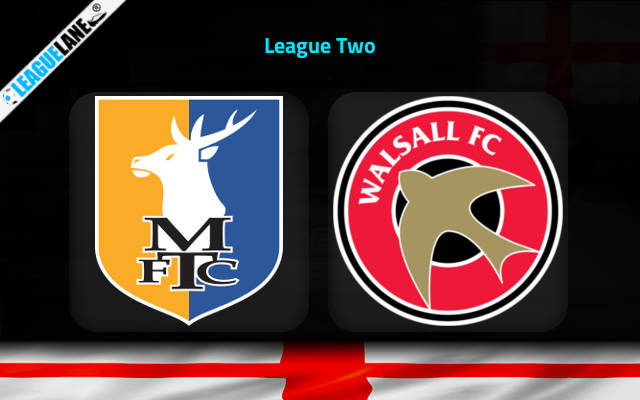 Mansfield are on a 5 game winning streak in the league and are at the brink of getting into Play offs. Lacking 6 points, Walsall is at the middle of the table and are not at all consistent. They marked their 8th loss in the league on the previous fixture and hopes to make amends in the upcoming schedule. With a confidence of 5 wins back to back, The Stags look forward to repeat the same as they hosts the visitors at One Call Stadium this weekend.

The Stags are at the 8th spot on the standing with 35 points from 23 games. They won 10 times in the league while drawing on 5 and losing on 8 other occasions. They have the same goals to conceding ratio on the table at 30:30.

Their latest win at League Two came under the fifth placed Swindon. However, they lost at the FA Cup against the Championship opposition Middlesbrough at the round of 32. Mansfield Town has to improve their defense as they have failed to prevent opponents from scoring in 5 of their previous 6 clashes.

On the other side, Walsall is at the 15th position on the table with 29 points. Of the 23 matches played, they won on 7 games while drawing and losing on 8 games each. They have scored 29 in total while conceding a sum of 30 which shows some room for improvement in defense is urgently needed.

After drawing to Newport on the opening match of this year, Walsall has surrendered to Stevenage by 1-3 the past week. Their poor defensive has got punished in the 5 of their last 6 games, with the opposing sides getting 10 goals in total.

Coming into this fixture, Walsall have not emerged victorious against Mansfield when having played them away from home in the previous 2 league fixtures.

We envisage a home win to happen as the hosts are on fire as of late with 5 back to back league wins. They are also excellent at home, undefeated in 79% of the games played at One Call Stadium.