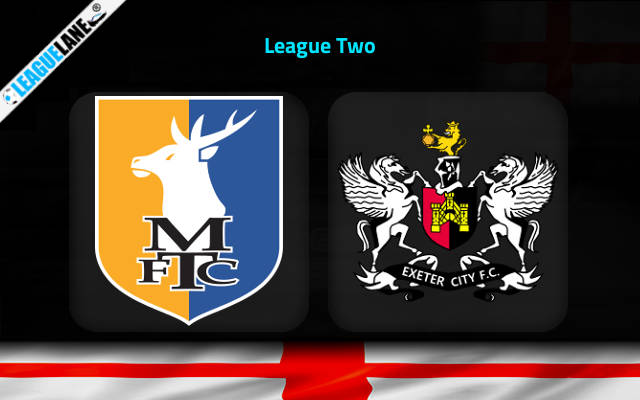 Game week 35 of League Two brings us the match between Mansfield Town and Exeter City on Friday at Mansfield.

Mansfield Town played against Bradford City in their last match, in which Mansfield scored two goals while Bradford could score none, ending the match in a win for Mansfield.

Exeter City played against Bristol Rovers in their last match. Both teams scored their goals in the first half itself. They couldn’t score another goal for the team, ending the game in a draw with 1-1 FT score.

Mansfield had a rough start to their season, but eventually made their way up the table. They have played well in their matches since the end of December, earning over ten wins from the matches. The team is currently unbeaten in their last thirteen matches, in which they have found wins in seven. The team stays 6th on the league table with 53 points.

Exeter has played well in their matches recently. The team has scored in seven of the last ten matches and has secured wins in six of them. Their performance in their matches this season has helped the team make their way up the table and sit in the 4th position with 54 points.

Both teams have played well in their recent matches and are only 1-point away from each other. The match will be a tight one can turn its tides at any time.

Mansfield Town has the advantage of playing in their home ground. They are on a win-streak for the last nine matches and have scored over 1.5 goals in the last five consecutive matches as well. The visitors have played moderately well in their away matches. The team is unbeaten in their last five away matches and will try their best to keep it going.