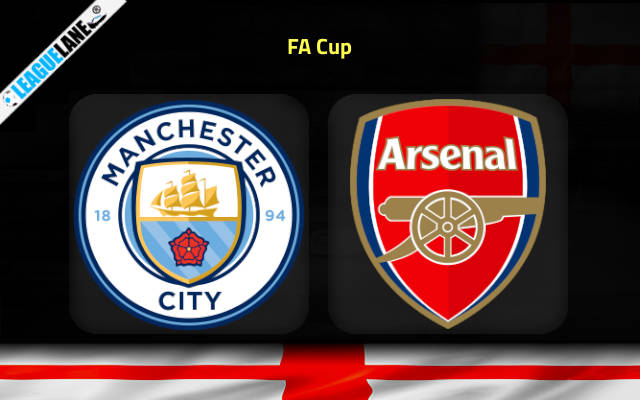 The top two Premier League teams will lock horns in the fourth round of the FA Cup on Friday evening at Etihad Stadium.

Manchester City head into the match as pretty big favorites according to the bookies but it is hard to find reasoning for that given Arsenal’s outstanding form in this season.

The Gunners won 16, drew 2, and lost just 1 of 19 Premier League outings this season. They are five points clear atop the table with a game in hand on the second-placed Citizens on top.

Arsenal continued their splendid spell of form in the last two weeks despite a very tough and complicated schedule.

Mikel Arteta’s men saw off the likes of Tottenham Hotspur and Manchester United in the last two league rounds, netting five goals in the process.

They have bagged at least two goals in five of six matches in all competitions since Boxing Day.

We can see plenty of space for Arsenal’s in-form strikers here against Manchester City whose back line allowed at least two goals in three of the previous four affairs across competitions.

On another note, it is worth mentioning that Pep Guardiola’s men notched seven goals in the previous two league wins over Tottenham and Wolves.

It is very hard to see the value in backing Manchester City at the 1.70 odds. Instead, we will chase an upset and back the red-hot Arsenal to claim the victory with the option of both teams scoring at the 7.50 odds.

Eddie Nketiah starred on Sunday with his brace against Manchester United. He is 4.33 to find the back of the net against Man City here and we will take the pick all day long in these circumstances.