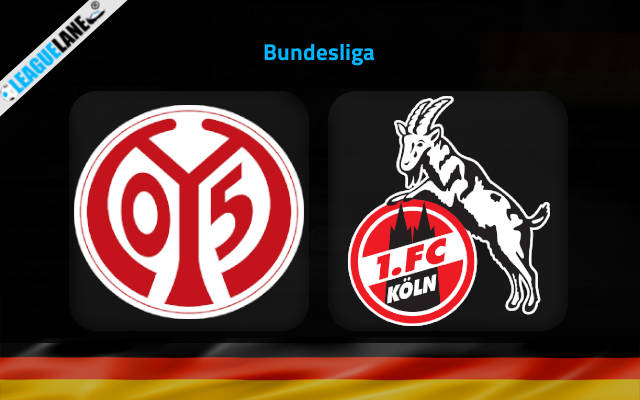 Mainz will be looking to complete a perfect week on Friday night when they host FC Koln in the 11th round of Bundesliga.

Bo Svensson’s men saw off Werder Bremen 0-2 on the road on Saturday and successfully passed the lower-division challenge in the mid-week’s DFB Pokal tie as well, beating Lubeck 0-3 on the road on Tuesday.

Mainz will have a nice chance to maintain this fine spell of form and make it three wins on the trot in all competitions here against FC Koln.

The visitors have been in a crisis recently but they did manage to end it last weekend with an important 3-2 win over Augsburg.

Striker Steffen Tigges was pretty inspired on the occasion, netting a brace in the win over Augsburg. Winger Denis Huseinbasic added one goal himself, his second in only four appearances for FC Koln this season.

These two players will represent the biggest threat to Mainz’s goal on Friday. It is very interesting to note that Mainz are still winless at home this season as each of their four wins has come on the road.

Bo Svensson’s men scored only two goals in four home outings this term. They did, however, face the likes of Union Berlin, Bayer Leverkusen, and RB Leipzig in the process. Has the time come for Mainz’s maiden win in front of the home crowd?

Mainz scored just two goals in four home matches this season. Since they have kept their net untouched in the previous two games in all competitions, we can look towards the Under pick here.

FC Koln are winless in four straight away outings. They did not shine in European fixtures, losing both home and away to Partizan Belgrade in the UEFA Europa Conference League. We will back Mainz to win & Under 2.5 goals FT pick at the 5.50 odds.