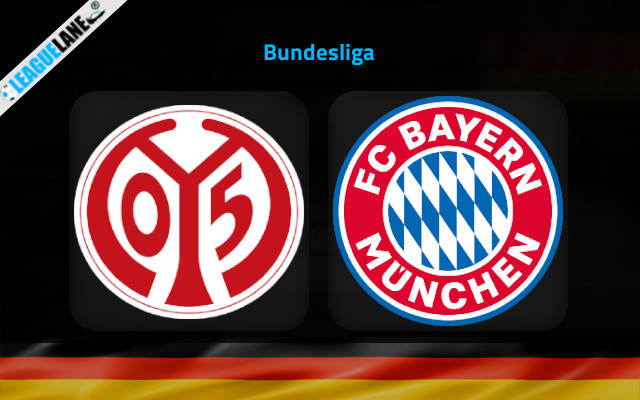 Bayern Munich extended their own record by claiming the landmark tenth straight Bundesliga title last weekend when they mathematically secured the silverware with the 3-1 victory over second-placed Borussia Dortmund.

The Bavarian giants once again confirmed the gulf in quality between them and the rest of the league.

They are now twelve points clear at the top of the table with three games to spare. Julian Nagelsmann can thus make some more rotations in his starting XI in the remaining three matches of the season and possibly give the opportunity to some younger players in the process.

This is why we should take Bayern Munich’s remaining three matches with a dose of reserve from the betting perspective.

However, it is very hard not to see the Bavarians as enormous favorites on Saturday afternoon when they travel to MEWA ARENA to take on the struggling Mainz side in the 32nd round of the competition.

Mainz will come into the game off of a tough 5-0 defeat to bottom-half outfit Wolfsburg last weekend.

Right center-back Niklas Tauer was the main catalyst for such a painful loss because he got sent off in the early stages of the game at VOLKSWAGEN ARENA to open the way for Wolfsburg to score five goals in total.

Mainz had earlier suffered defeats to Augsburg and FC Koln as well. They took just two points from the previous five league outings.

On another note, though, Mainz have a fantastic home record in this term of Bundesliga. They won 9, drew 4, and lost just 2 of 15 league matches at MEWA ARENA this season.

Bayern Munich to Win & Both Teams To Score has value at the odds of 2.62 odds since this scenario has occurred in five of the previous seven head to head meetings between the two outfits.

We would by no means be surprised to see the hosts on the scoresheet knowing that the Bavarians have already secured their record-extending tenth consecutive league title last weekend.