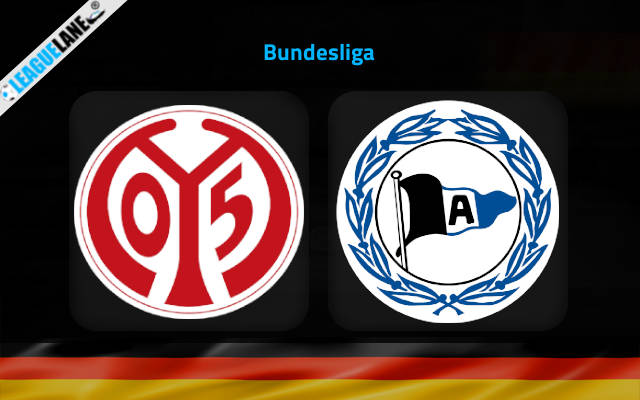 Although they hold the 10th place in the Bundesliga table at the moment, Mainz own one of the best records on the home pitch in the entire division this season.

They will be hoping to maintain it on Saturday afternoon when relegation-threatened Arminia Bielefeld come to visit MEWA ARENA in the 27th round of the competition.

Mainz are right in the middle of the Bundesliga standings and have pretty much nowhere to go before the end of the season. However, the lack of proper motivation (table-wise) did not prevent them from getting some big results of late, especially in front of their fans.

Mainz have thus gone on a run of five successive home wins in Bundesliga. The run is more impressive if we know they have played the likes of Hoffenheim and Bayer Leverkusen in the process.

It is, however, worth noting that until Wednesday and the home clash against Borussia Dortmund Mainz have not been in action since February 26th when they fell 3-1 at Union Berlin.

Arminia Bielefeld will approach this game with a much greater need for points. They have dropped straight into the relegation battle after a streak of three successive defeats in the competition.

The latest came on Sunday afternoon away at Borussia Dortmund where Arminia lost 1-0.

The team led by Frank Kramer have serious issues with the lack of attacking creativity these days as they only managed to find the back of the net once in the previous five Bundesliga affairs.

Mainz won 8, drew 3, and lost 1 of 12 home fixtures in this term of Bundesliga and we have to see them as favorites against Arminia Bielefeld who will travel to MEWA ARENA off the back of three subsequent defeats.

We will thus go for the home win at the 1.70 odds, while the braver tipsters can try with Mainz to keep a clean sheet at the odds of 2.10.