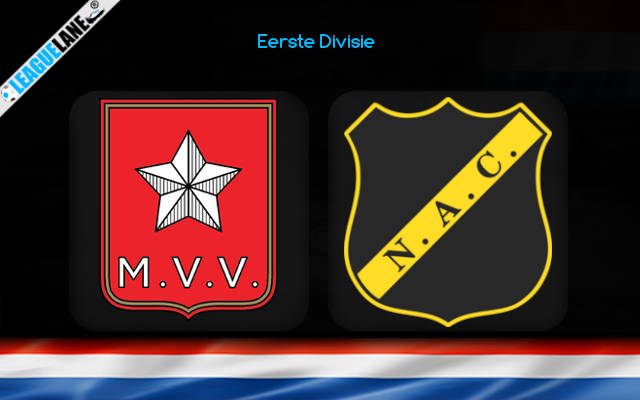 Game week 29 of Eerste Divisie brings us the match between Maastricht MVV and NAC Breda on Friday at Maastricht.

MVV played against Dordrecht in their last match. Even though MVV scored the first goal in the match and took the lead, they couldn’t keep the lead until the end. Dordrecht scored three goals in the second half of the match, ending the game in a loss for MVV with 3-1 FT score.

NAC Breda has added another win to their win-streak after their last match against Jong PSV. Even though PSV scored the first goal of the match, they couldn’t keep the lead for long. Breda scored within five minutes and evened the scoreboard. Breda scored two more goals, ensuring a win for the team. The match ended with 3-1 FT score.

MVV’s win in their match against Den Haag didn’t give the team the much-needed motivation to earn more victories. The team can’t seem to find their footing in the game yet. From the last ten matches, the team has lost in eight of them. They have moved down the table to the 16th position and have got only 26 points to their name.

NAC Breda has played well in their recent matches. They currently have an ongoing win streak which has lasted for three games. The team now stands 9th on the league table and has earned 39 points from their matches so far.

MVV has not been in their best form in the recent matches. They have lost in four of their last five matches, in which they failed to score in three of them. The visitors, Breda, have played well in their most reason matches, earning wins in three consecutive matches and is unbeaten in the last four matches.

Even in their home matches, MVV has not had a positive result and is winless in the last seven matches. Breda’s performance in away matches has not produced the results they had hoped for. But the recent results are better when compared with MVV’s home matches.

I believe the match will end in a win for Breda. Both teams have scored in their most recent matches. So we can expect them to score in the match as well.