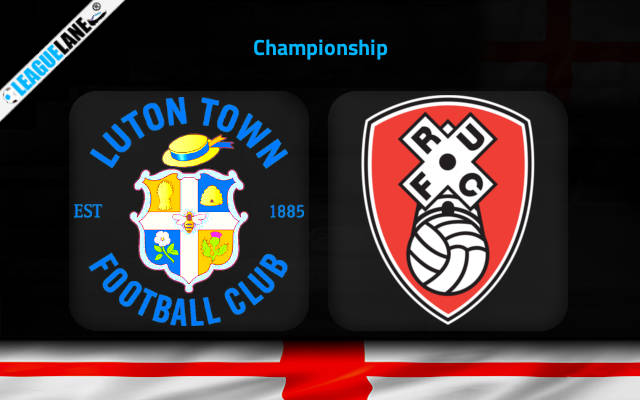 Luton have not been anything special lately. But they certainly can take pride in the fact that they are consistent at home despite all issues. Meanwhile, Rotherham are on a long series of poor results, and particularly on the road they have been a mess.

They are placed 14th in the table, and have a single win to their name in the past six games. And worryingly they have been one of the worst teams on the road since the start of the season.

So far they managed just two wins away from home, and one of these two victories came against the struggling Stoke.

It is also to be noted that they are a team that were promoted to the top flight at the end of the last season. This inexperience is surely affecting them. They are finding it hard to cope with the veterans of the Championship.

Meanwhile, Luton lost just thrice in all competitions in the past three months, and through this stretch they consistently found the back of the net.

Do also take note that they are on an unbeaten run at home that goes back more than two months. In the process they locked horns with some titans of the league too.

Considering recent form of either squad, I infer that Luton have the upper hand this weekend. But their defense has not been top-notch lately, and as such it is a doubt if they will be able to keep a clean sheet.

Not only did Luton score three or more goals in two of their past four home games, but they remained invincible here since the first week of September.

They currently need a surplus of just three points to climb into the top-four of the table, and will be eager to take advantage of this upcoming fixture.

Meanwhile, Rotherham are struggling with poor form, and especially so on the road. Moreover, they have a poor h2h record against this opponent in recent years.

Likely, expect a win for Luton.

However, their defense does not give me much confidence. Against a desperate Rotherham, they might find it hard to keep a clean sheet.

Tips for Luton vs Rotherham