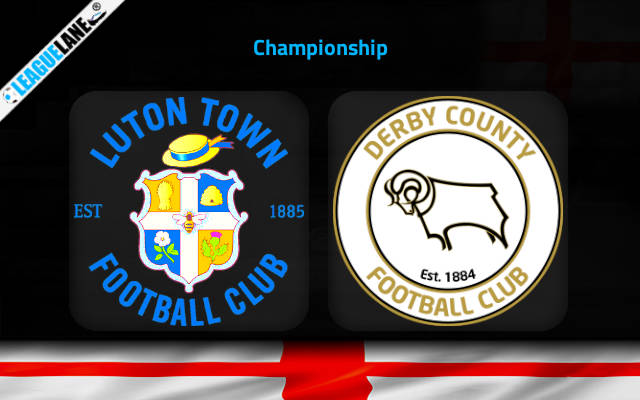 It’s admirable that Derby have climbed to the 22nd spot after the league deducted 21 points from them. But. as of now, they need a surplus of nine points to climb out of the relegation zone, and with just 13 match-days remaining, pressure is mounting on them.

And problems will only get more complicated, when this is coupled with their leaky defense.

This is a great opportunity for the in-form Luton to deliver a win this weekend. They are at home, and have built quite some momentum with their recent performances.

They have been finding the back of the net at a great rate, and they also have a positive h2h record at this stadium in recent seasons.

Judging these factors, expect a win for Luton this Saturday at their home.

Luton won 1-2 on the road the last match-day, against Stoke. They had won nine of their preceding twelve overall games, and they had also scored two or more goals in eight of their former twelve fixtures.

Going on, they had won five of their past six appearances at home, and they have lost just twice at home since August of 2021.

On the other hand, Derby lost 1-2 at home the past game week, against Millwall. They had also lost five of their previous nine games, and importantly, they are on a four-game losing streak on the road.

Do also note that they have won just once on the road since August.

Considering these observations, and especially the desperation of Derby, expect a win for Luton this Saturday at the Kenilworth Road.

Tips for Luton vs Derby