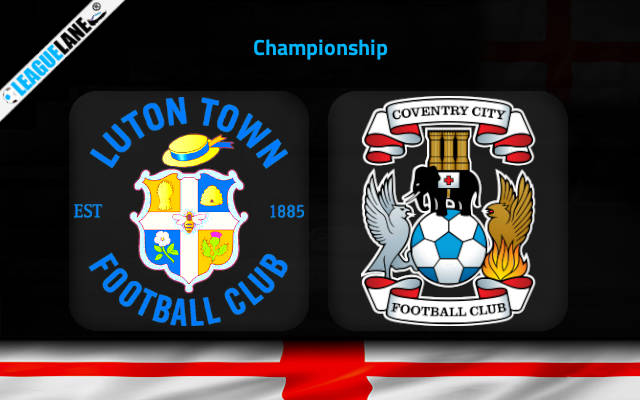 Luton line up against away team Coventry at Kenilworth Road in the Championship game on Wednesday.

Luton has been one of the decent teams in the English second division for the past several years and especially so during the previous season.

They seem to have picked up things lately. Luton was unbeaten in the past 4, disregarding a 1-2 losing effort against Wigan in the previous round.

Meanwhile, Coventry recorded yet another winless outcome in the past match-day. They lost 3-0 to Norwich in their most recent Championship fixture.

The problem for their English coach Sillett lies in his team’s defensive line, which allowed a total of 10 goals in the past 4 fixtures. As a result, they reside at the bottom spot on the league standings.

By the looks of things, we expect a pleasant day for the local supporters at Kenilworth Road on Wednesday evening.

Coventry’s unimpressive in the Championship will be a disadvantage for the team when they play against Luton away from home in the upcoming fixture. They are yet to post a win in this campaign and are on a 3-fixture losing streak on the road.

On the other side, Luton evaded a defeat in 3 of the past 4 Championship fixtures. Even though they follow a disappointing form at home, it is not weak as Coventry’s on the road.

The h2h tradition also suggests a win for Luton, who is currently on a 7-game unbeaten streak against Coventry. We therefore back the home side to seal a win here.