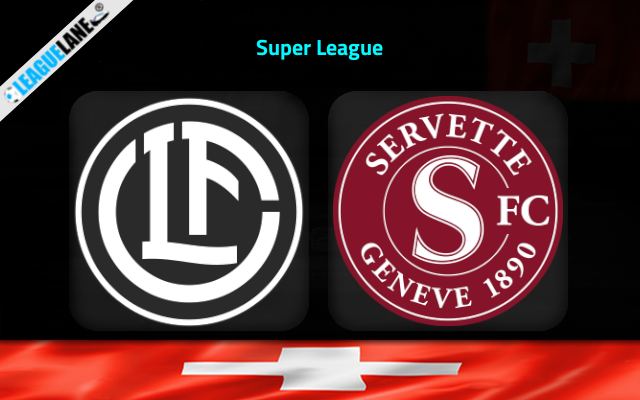 Neither Lugano nor Servette are enjoying a good spell form in the league lately. Both these outfits will face each other in a Super League fixture on Saturday at Stadio di Coranredo.

Lugano are on the back two subsequent defeats in the league. They lost two St. Gallen at home and the table topper Zurich away from home in their most recent fixtures. They will be hoping to better themselves in front of their local supporters in this fixture.

They sits 4th on the table with 33 points. They sits on the edge of the promotion spot but have 7 points difference with it. They have an average attacking and defensive lineup.

Meanwhile, Servette are winless in the past two league fixtures. They drew to relegation battlers Luzern at home and lost to St. Gallen on road in those two affairs. They have a seesaw of form in the league of late.

They sits 5th on the table with 29 points. They possess a disappointing defensive lineup.

By the looks of things, we expect a low scoring affair at Stadio di Cornardo as these two outfits owns an average attacking side. Servette looks to have a weak defensive lineup, hence we expect them to leak one from Lugano in this fixture.

Lugano have only lost thrice in the past 12 home fixtures across all competitions. They possess an excellent form and have been scoring in most of their home affairs recently.

On top of that, they possess a strong h2h form against Servette in the recent history. Knowing that Servette have lost each of their past two league fixtures on road, we have enough reasons to expect a win for the hosts.