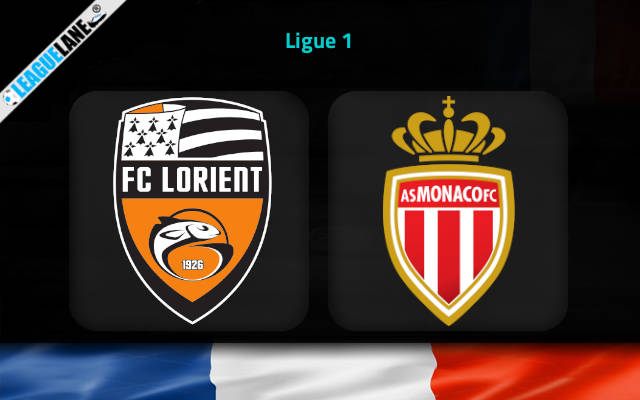 Lorient vs Monaco Predictions and Free Tips from our expert tipsters when the teams go head-to-head in the France Ligue 1 on Thursday, 12 January 2023.

A set of inconsistent outcomes have affected Lorient in terms of their positioning in the standings. They have lost three of the last five league fixtures and sits at 6th spot at present.

Meanwhile, Monaco have sealed a total of four wins in the past five league outings and climbed into the 5th position, two points clear of their Thursday’s counterparts Lorient.

Monaco have only lost once in the last 8 head to head clashes against Lorient. Their clashes have generally been high-scoring affairs.

Monaco won four of the last five encounters against Lorient at this venue. They have scored a total of 10 goals in the past four h2h away meetings alone.

Who will win the match between Lorient vs Monaco?

The current home form of Lorient is so disappointing as the team lost their past three consecutive match-ups. They are on a four-game winless streak here.

Meanwhile, Monaco sealed back-to-back wins on the road and will be following the thread to enter this fixture. Knowing that Monaco have an upper hand in the recent h2h tradition here, we expect a win for them on Thursday.

The defensive side of neither of the two are solid. However, they both are having a decent attacking side and we can expect them to slot in enough of goals to deliver a goal fest on Thursday.

These two sides are having a defensive line which have allowed goals at a rate of over 1.5 per game. Since we expect a goal fest, we don’t see the chances of this match to be a one-sided affair. They both could possibly score goals past the weak defenses here.

Monaco has been sealing victories consistently of late. Their h2h superiority, even in the away meetings against Lorient is more than enough to back Monaco at 1.91 odds.

Bookmakers have priced both teams to score at 1.61 odds. But we like to place over 2.5 goals at 1.73 odds considering the goal trend of both teams.