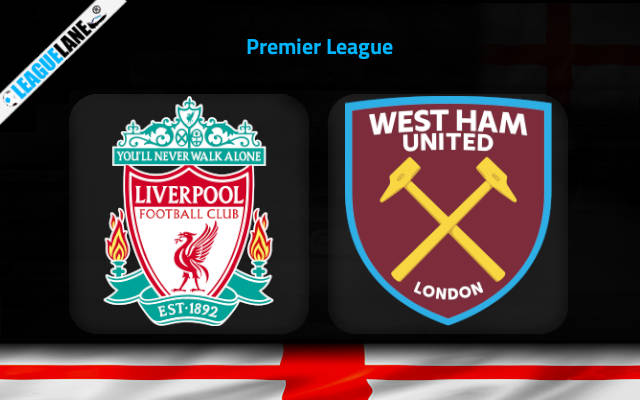 Liverpool pulled off their best performance of the season on Sunday afternoon when they dispatched champions Manchester City 1-0 at Anfield.

This could well prove out to be the turning point of the entire season for Jurgen Klopp’s squad who had earlier won just two of the opening eight league outings.

The Reds are now 8th in the league, sitting 10 points shy of Manchester City and having a game in hand on the reigning champions.

A win on Wednesday night against West Ham would cut the gap to seven points and get Liverpool’s title ambitions back on track, especially with more favorable fixtures to come before the World Cup.

We thus see Liverpool as enormous favorites to back up the huge victory with another home success against West Ham.

The Hammers have by no means been spectacular so far in the season. They have continued with their hot and cold performances by playing only a 1-1 draw away at Southampton on Sunday.

David Moyes’ men hold the 12th position in the league ladder. They took just one point in the previous three away fixtures, scoring only twice in the process.

Liverpool are without Luis Diaz and should allegedly miss Diogo Jota here as well. Nevertheless, their Egyptian King is back in form after a slow start to the season.

Mohamed Salah scored four goals in his last two appearances for the Reds in all competitions, including a hat-trick off the bench in the away win over Rangers in the UEFA Champions League.

Liverpool have caught the momentum with a massive win over Manchester City on Sunday. The fact they could have easily scored at least two or three goals more past the champions says enough.

We see the value in backing the Reds to win both halves at the 3.40 odds. Also, Mohamed Salah has been on fire lately and he is well worth backing to score anytime here at the 2.10 odds.