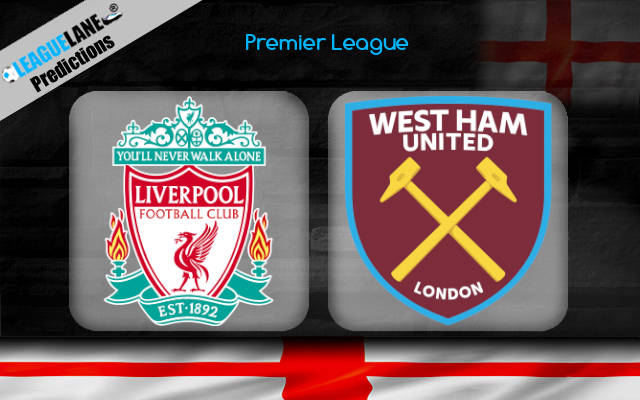 Liverpool welcome West Ham for Saturday’s Premier League clash hoping to stretch their unbeaten run across all competitions to 4 games.

However, we expect the Hammers to give a tough test considering they have been on song as well with a four match unbeaten streak in the league.

The team managed by David Moyes look good on the attacking front as well and scored 11 goals from 4 games after the opening weeks’ defeats to Newcastle and Arsenal. They were literally unlucky to have left without a win from Olympic Stadium last week, against the mighty Man City and had the best of chances to kill off the game before Phil Foden’s equalizer at the hour mark.

West Ham are 12th in the table after picking up 2 wins and 2 draws from last four games.

On the other hand, Liverpool bagged a narrow 2-1 win against Sheffield United last weekend, but as the scoreline indicates, it was far from convincing. Though, they had the better and more chances, but had to mention that they looked shaky at the back.

And a similar pattern returned in the midweek’s 2-0 Champions League over Midtjylland. However this helped them to bag the third consecutive victory across all competition after the 2-7 mauling at Aston Villa and the 2-2 stalemate in the Merseyside derby.

Jurgen Klopp’s men are joint top at the table level on 13 points with arch rivals Everton, but also the worst defense in the league after conceding a total of 14 goals.

The Reds are unbeaten in the last 8 h2h meetings with West Ham and won 8 and drew 2.

However, a low lying Hammers did give a big scare to Klopp when they visited this stadium in February this year, only to save by late goals by Mane and Salah to come back from behind to win 3-2.

West Ham’s last win against Liverpool happened in the 2015/16 season and they did a double by winning 3-0 at Anfield and 2-0 at their old home, the Boleyn Ground.

There have been over 2.5 goals scored in 6 of their last 8 h2h meetings.

On another day, Liverpool will walk into Anfield as firm favourites as justified by the odds. But today’s scenario is different and they are marred with injuries in the defensive unit.

Van Dijk is already in the nursing table and he is now joined by Fabinho and now Matip is lacking match fitness.

So, West Ham who were brilliant in the past 4 weeks have a chance to nudge something from this match or at least a respectable full-time result.

Therefore, I go with btts are my primary option since Liverpool have conceded 10 goals in their last 5 PL games and West Ham are coming to Anfield after scoring in 6 consecutive away games.

Taking into account the injuries to key defenders in Liverpool squad and West Ham’s defensive style of play, an handicap on the visitors will be a decent alternative. And for the same my recommendation is to go with the +1.5, +2 asian handicap on the Hammers.

If Liverpool lose, draw or win by 1 goal, the tip is win. But if they win by 2 goals, we lose half the stake and the other half is multiplied to the odd. The bet is lost if the Reds win by 3 or more goals.