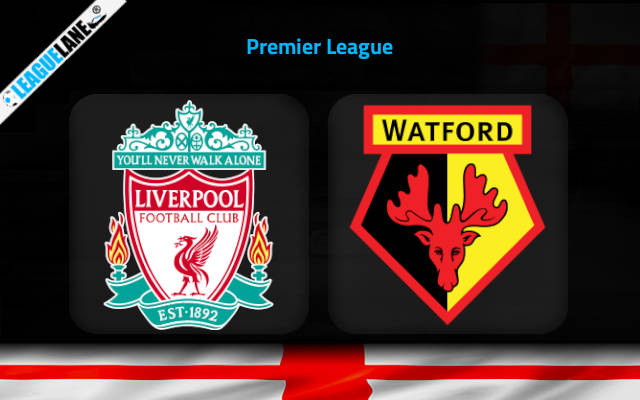 Premier League returns to action this weekend as Liverpool host Watford in the maiden game of Saturday’s schedule at Anfield.

The Reds will be searching for their landmark tenth consecutive league win on the occasion and they will be heavy favorites to get one.

Jurgen Klopp’s machinery took advantage of some unexpected slip-ups from Pep Guardiola’s Manchester City to narrow the gap behind them to only a single point at the top of the table.

Liverpool will face Man City in the next round and they will certainly want to further boost up the confidence with a commanding victory over relegation-threatened Watford on Saturday.

The visitors will have a mountain to climb in an attempt to save the top-flight status. They are third from bottom in the Premier League ladder at the moment but sitting three points below Everton in the safe zone.

The Toffees have two games in hand as well on Watford. However, the Hornets can hardly expect much against title hopefuls on the road, especially if we know that Liverpool have a fantastic record of 11 wins and 3 draws in 14 league fixtures at Anfield this term.

Klopp’s troops have conceded just 7 goals in 14 home outings this season. Watford have failed to score in four of the last six Premier League affairs on the road. It is very hard to imagine any other scenario but a comprehensive home win to nil here.

Watford did beat Southampton 1-2 on the road in their previous Premier League game but they really do not have much to hope for here against Liverpool.

We see great value in backing the home win to nil at the 1.80 odds, while you can also back the Reds to win by three or more goals difference at the 2.00 odds.