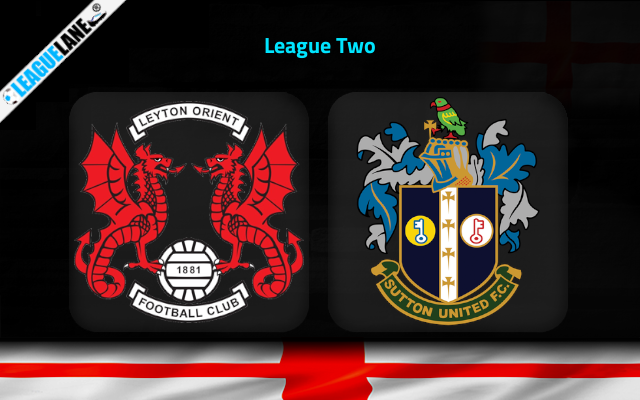 Leyton Orient vs Sutton United Predictions and Free Tips from our expert tipsters when the teams go head-to-head in the England League Two on Saturday, 17 December 2022.

Sutton are on a three-fixture unbeaten streak in the league currently. They will be hoping to maintain the thread by recording more of those in the coming fixtures.

Their Saturday’s fixture will be more challenging as they face an in-form Leyton Orient on the road. They have only lost twice so far this campaign and are in possession of top spot in the league standings.

Leyton Orient won three of the last four clashes against Sutton United. The latest meeting had finished in a 3-1 win for Leyton Orient.

They have only met four times at this venue. Leyton Orient won three of those scoring three or more goals.

Who will win the match between Leyton Orient vs Sutton United?

Leyton Orient is having an impressive form at home lately. They are on a three-fixture winning streak at home while Sutton follows a three-game winless streak on the road.

On top of that, Leyton Orient have a strong head to head form against Sutton. Therefore, we expect a victory for Leyton Orient.

Sutton United owns a weak offensive side and it will be a tough ask for them to score against this Leyton side, who owns the best defensive line of this campaign.

On top of that, more than 60% of the matches played by Leyton Orient and Sutton United have seen under 2.5 goals full-time.

Leyton Orient have a kept a clean sheet in the past four home matches. On the other side, Sutton United have scored just four goals in the last six road trips.
By the looks of things, expect a one-sided affair at Brisbane Road on Saturday evening.

Taking into account these observations, we like to back Leyton Orient to win at 1.80 odds. For the second tip, we like to place the Under 2.5 goals bet at 1.62 odds considering the goal trend of both these sides.