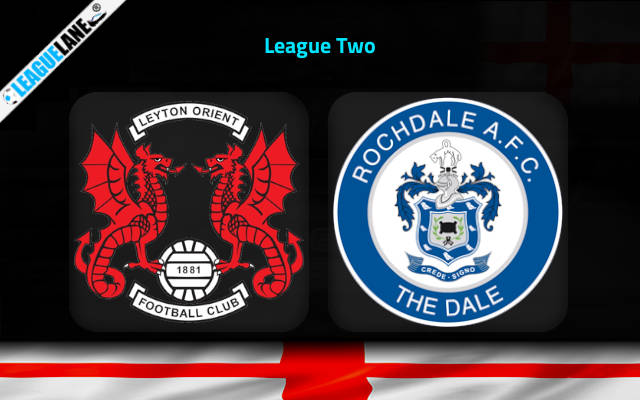 Game week 38 of League Two brings us the match between Leyton Orient and Rochdale on Saturday in London.

Leyton Orient has exhibited poor performance during their matches this season. They have not won a match in the last 16 matches. However, in the most recent matches, their number of draws has increased. From the last ten matches, the team has drawn in five and lost in five matches.

Leyton played their last match against Forest Green Rovers and secured a draw. Both teams scored a goal each in the match. The team currently sits 20th on the league table with 37 points from their matches.

Rochdale has not had the best season so far. The team has been inconsistent with their form, leading to the team achieving mixed results from their matches. From the last ten matches, the team has two wins, five draws and three losses.

Rochdale played their last match against Salford City, in which both teams scored a goal each ending the match in a draw with 1-1 FT score. The team now sits 17th on the league table 40 points from their matches.

Leyton and Rochdale have shown similar form in their recent matches. However, Leyton’s bad streak has lasted for over fifteen matches while Rochdale has shown inconsistency with their form.

Leyton Orient’s home matches have not produced the results the team had hoped for. They have not had a win in their home ground in the past eight matches. Rochdale’s away matches have only one win to show from the last ten matches. After their last win, the team is back again with a loss streak.

Both teams have shown a hiccup with their form in the recent matches. However, looking at the records, Rochdale has performed better than Leyton. So, the match is most likely to end in a win for Rochdale or in a draw. Both teams have scored in most of their recent matches and can be expected to score in this match as well.