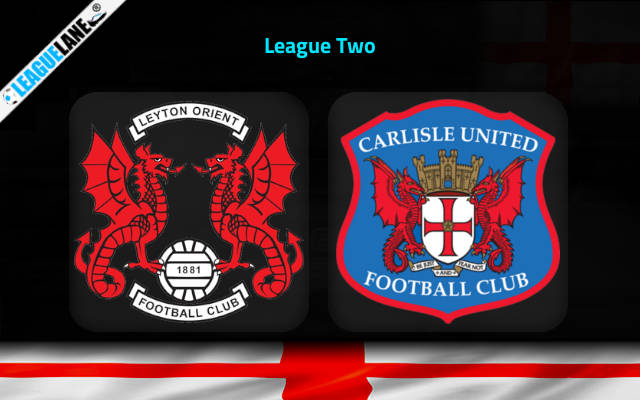 Game week 34 of League Two brings us the match between Leyton Orient and Carlisle United on Saturday in London.

Leyton’s latest matches have not produced the results the team had hoped for. They are winless in their last ten matches and have scored in only two of the matches. Leyton sits in the 18th position on the league table and has 33 points from their matches so far. The team’s poor form has been seen since early December. They will hope to break this poor streak and earn a win in this match.

Carlisle United has not played well in their matches this season. Their poor form has put the team second from the bottom of the table and they have earned only 28 points from the 31 matches they have played. From the last ten matches, Carlisle has scored in five of the matches but could achieve win in only two. Their most recent matches have ended winless. So, Carlisle will also wish to break their streak with a win in this match.

Both Leyton and Carlisle are in the same position when it comes to their performance in the recent matches. They have not found a win in over five matches. Leyton can’t seem to find their way back to the form they had kept before.

Even Leyton’s recent home matches have produced some poor results. They have lost continuously in their last four matches and have failed to score in them as well. Carlisle’s two wins in the recent away matches are the only wins they have secured since September.

I believe the match will end in a draw with none of the teams scoring in the match.