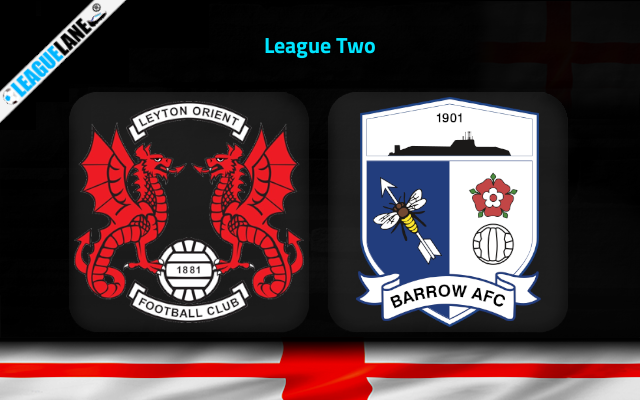 Leyton Orient have managed to find a position well clear from the relegation spot after recording brilliant results in their recent league fixtures. They sits 17th on the table with a total of 43 points. They have a decent offensive and defensive lineup.

Leyton Orient recorded a 0-3 win against Harrogate on road in their most recent league fixture. With that win, they have managed to record six consecutive unbeaten games in the league. They will be hoping to extend their current run when they set to face their next rivals.

Meanwhile, Barrow sits 21st on the table with inconsistent form in the league of late. However, their recent form is far better than their overall form this season. They have an average offensive and a disappointing defensive lineup.

Barrow lost 1-2 to Carlisle at home in their previous league match-day. They were having an unbeaten streak for three games before conceding the above defeat. They will be hoping to return back to their unbeaten streak.

By the looks of things, either of these outfits will be desperate to evade a defeat at Brisbane Road when they meet each other in a League Two fixture on Saturday.

Leyton Orient will enter this match-up following two back to back unbeaten home league fixtures. They have scored two or more goals in each of those two home affairs.